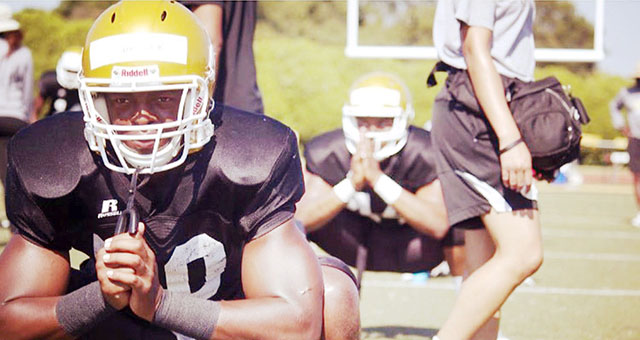 Dominique Jackson is soft spoken, but don’t let that fool you. The multitalented athlete from Brewton was a first team all-state selection in his senior year for the T.R. Miller Tigers.

After graduating from TRM in the spring of 2014, he continued his football career for the Alabama State University Hornets.

Now an ASU sophomore, Jackson has acclimated to the collegiate-athlete lifestyle.

“I wasn’t working as hard in high school as I should have,” Jackson said about his performance on the football field.

“Going from high school to college, you have to work way harder because a lot of people out there are just as talented as you,” he said.

“The game is just faster. Not too much, but it’s faster than it was (in high school),” he said. “I feel like it’s more mental in college than it is in high school. But at the same time its still football, so I just go out there and play.”

It was in his first game against Sam Houston State two years ago that Jackson said he felt like he could compete at the college level.

“My first game I played as a freshman I had five tackles,” Jackson said. “I felt pretty good about that performance.”

Jackson said that academics are a top priority if any athlete wants to see the field.

“In the classroom you have to stay on top of your grades first, before you do anything else,” he said.

Jackson said his major is undecided but he is leaning towards studying criminal justice.

“I just have always been interested in law and the system,” he said as he described being a fan of the show CSI.

“Yeah, I’ll turn to that show and get hooked,” he added.

This past season Jackson finished with 61 total tackles for the Hornets. He recorded 12 tackles against Southern U —–– a career high.

“I think I did pretty good, up until my (shoulder) injury,” Jackson said. “I didn’t miss any games, but I didn’t start until the tail end of the season. Before I got hurt, I was No. 7 in the SWAC in tackles. I don’t know where I ended up finishing.”

ASU Hornet co-defensive coordinator and linebacker coach Ted Daisher said Jackson is the type of player you can always count on.

“Character is really important on and off the field,” Daisher said. “(Jackson) is a guy you can count on to do the right thing. That’s important. He’s a smart kid to begin with, and he has a good feel for the game.”

Jackson believes he still has some work to do to improve his game, but looks forward to the challenge.

“My focus is to continue to get better,” he said. “I want to improve on shedding blocks and tackling. And I want to study more film off the field.”

Jackson is the son of Don and Laura Jackson of Brewton.