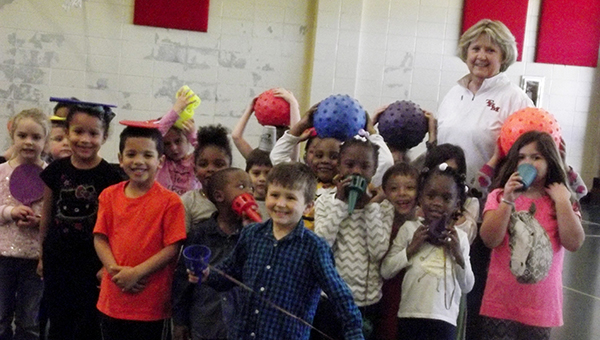 Lydia Grimes | The Brewton Standard
Coach Kim Owens stands with a group of students at Brewton Elementary School. She will retire at the end of htis moth.

BES teacher to retire at month-end

Kim Owens, who teaches physical education at the Brewton Elementary School, is turning her equipment in as she retires at the end of the month.

Owens said she was drawn to teaching P.E. because of Karen Reynolds – her tennis coach and instructor at what was then, Jefferson Davis Junior College.

“She greeted her students with a smile, smiled and laughed throughout her classes and then smiled as you left,” Owens said of her former teacher. “I wanted to be like Karen. I hope I have.”

Reynolds said the gym has been her classroom since she was 22.

“It has been a joy to teach a subject that children love,” she said. “No matter where I am, on campus or around town, I am greeted with a hug and then the question, ‘What are we going to do tomorrow?’

“How rewarding to teach a subject that students run to and once finished, beg to stay,” she said. “These are the things that have made teaching my career not my job.”

Anne Lambert, the principal at Brewton Elementary School, said that Owens has earned her retirement, but that she hates to see her go.

“Coach Owens is one of the finest PE teachers I have ever had the privilege of supervising,” Lambert said.

“She is organized, has high standards for her students, and knows how to make PE fun. The students love her and respond to her class with enthusiasm.

“She fosters a love for exercise in the students and has helped develop numerous athletes during her tenure in the Brewton City School system.”

Owens said it has been an honor and a pleasure to work in the Brewton City School System for the past 39 years.

She was able to spend her entire career working in the system from the time she did her student teaching. She was hired that same year to teach girl’s basketball at T.R. Miller High School.

She said she was able to enjoy coaching two teams that made the Final Four, to sponsor cheerleader squads that were named district champions and to have had the privilege to coach her daughter in tennis and her son in golf.

“The golf team making state and my son being named to the All State Golf Team for four consecutive years was indeed a high point in my tenure,” she said.

“I started my coaching career with responsibilities in both basketball and track.,” she said. “I will finish my last year coaching middle school volleyball and assisting with varsity softball and volleyball.”

She said the TRM volleyball team making the Elite Eight this school year was a great way to end a long and rewarding coaching career.

“The memories from my years of teaching and coaching are cherished treasures,” she added. “I have learned over these years that its the people, not the things, in life that truly matter.”

Owens grew up in Flomaton and graduated in 1973 from Flomaton High School. After graduation, she attended JDCC, where she played tennis. She later transferred to Troy University and continued to play tennis. She met her husband, Bo, while she was at college.

“I grew up in Flomaton, but I married a Brewton man and came back here to live.” she said.

She and Bo were married in 1975 and raised two children, Burgess and Trip.

“I have made some plans for the future,” she said. “I plan to sleep a little later, maybe walk a little further, visit a little longer with my family and friends, continue to enjoy Miller athletics and certainly count my blessings every single day. Faith, family, friends and a rewarding career – I have certainly been blessed.”