Set to go on the road 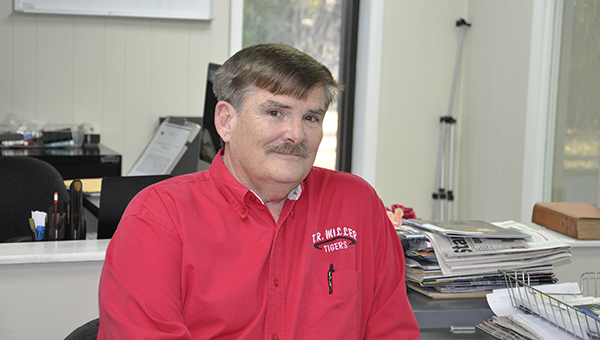 Lydia Grimes | The Brewton Standard
TRM’s Wade Morris will put away his red grading pens at the end of this school year. He and his wife plan to travel.

Wade Morris has made the decision to retire at the end of the school season.

“I have loved it here at T.R. Miller High School, but it’s time I decided to do some things that I have always wanted to do,” Morris said. “I spent many years in the U.S. Navy and have traveled all over the world, but my wife and I are planning to buy a motor home to see the good old U.S.A. while we are young enough to enjoy it.”

Teaching was not his first profession. In fact, he had no idea that he would end up teaching. He was born in Mobile in 1954 into a military family.

“We moved around a lot,” he said. “By the time I started school, I was living in Canada. After that I was back and forth between Rhode Island and Brewton. I was in Meridian, Miss. in the third grade and in Memphis, Tenn. in the seventh and eighth grades. I also spent four years in Mississippi before moving to North Brewton and attending high school at W.S. Neal High School.”

He graduated from W.S. Neal in 1972, but he had already joined the Navy. He signed up on March 6 knowing that on his 18th birthday on March 17, his name would enter the draft. Sure enough, he received his draft notice and had a hard time convincing the powers that be that he was already in the military.

After graduation from high school, his military career began with him studying aircraft mechanics. Eventually he was sent to Whiting Field for about three years.

“I was a big University of Alabama football fan and, of all places, the Navy sent me to Auburn University to study for two years,” he said. “After that I was sent to Norfolk, Va., where I worked on the F-14 Tom Cats.”

In 1987 he was once again sent to Whiting Field and spent almost a year on the U.S. Eisenhower off the coast of Iran during the time of the hostage situation. He finally was sent stateside and attended Troy University off campus at Eglin Field.

“In all that time, I never set foot on the campus at Troy,” he said. “It was only when my daughter went to college there that I actually went to Troy. I was also stationed at Naval Air Station in Pensacola. We were like the movie, ‘An Officer and a Gentleman.’

“I ran my first marathon while I was there.” Morris said. “A friend and I entered the Blue Angels Marathon, not meaning to finish it. We just wanted the t-shirt that we would be given at the half-way point. When we got there, we felt so good that we finished the marathon. We began that training with 82 people and only 16 of us graduated in aerospace engineering.”

He continued to serve on various aircraft carriers including the U.S.S. Saratoga where he won a citation given by the Secretary of the Navy.

While serving as the Rescue and Assistance Officer on Oct. 2, 1992, he was called to take his team by helicopter to the severely damaged and burning Turkish ship Tog Muavenet.

He was lowered to the deck of the burning ship where he assessed the situation and put into action fire fighting team as well as a separate dewatering team.

At great personal risk, Lt. Morris put himself in an area of debris that contained dangerous explosives. He entered that area and directed the evacuation of several Turkish sailors. Most of the officers had been killed in the initial explosion and there was a definite language problem. He was given this citation for his act of heroism in a dangerous situation.

Morris retired from the Navy in 2001 as a lieutenant commander and finished his master’s degree at the University of New Orleans.

He and his first wife, were the parents of two children and in 1997,  he married Kim Morris. She worked in the central office of the Brewton City Board of Education, and he went to work in the Escambia County School System at the Atmore Middle School where he taught seventh and eighth grade science for two years before coming to T.R. Miller High in 2005 to teach ninth grade physical science.

“I love my students and they seem to respect me,” Morris said. “I run my classroom like the military, and although some might not agree, I run a tight ship.

“I believe students should be respectful of their elders,” he said. “They say ‘yes sir’ and ‘no sir’ to me, and I insist they act in a respectful manner. I’m afraid that politeness and good manners are not observed as they used to be.”

BPD: Help us find her