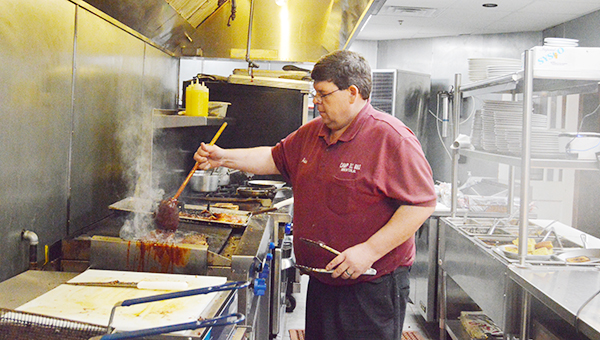 Manasco, a Brewton native, is known for his time as chef at the Country Club of Brewton, but now he’s focusing the basics he learned from his family.

Manasco graduated from T.R. Miller High School in 1990. He started in the kitchen at an early age alongside his mother and grandmother.

“We stayed with my grandmother a lot, while our mother worked, and she didn’t believe in being idle,” he said. “We were always doing something. If peas needed shelling, we did it. We worked in the garden with corn and tomatoes. They also grew blueberries but I ate more of them than went into the bucket.”

Manasco credits both his mother and grandmother with his interest in cooking.

“I learned to cook at my grandmother’s, and Mom had special things she cooked that I learned to make,” he said.

By the time he graduated from high school, he knew that he wanted to become a chef and began to work at the Brewton Country Club. He entered Jefferson Davis Community College and became a part of the J.D. Jazz group, paying his way through college.

He continued with his schooling at Faulkner University at Gulf Shores, getting his culinary degree.  He’s spent time in kichens in Birmingham, Orlando, Fla., Miami and Sarasota, Fla.

He married a Brewton girl, Stephanie Johnson, in 2011, and they moved back to Brewton.

Before coming to work at Camp 31 a couple of months ago, Manasco spent the last two and a half years as the chef at the Brewton Country Club.

“I loved working at the Club,” he said. “It was a big risk for me to leave them to come to a new restaurant, but I think I made the right decision.”

There are around 65 employees working there. In addition to managing the business, he also works a modern kitchen that has at least six workers at any one time keeping the food ready.

“I have a good number two chef working with me that many locals will know,” he said. “James Fountain is also a chef here.

“We turn out around 500 pounds of pulled pork every other day.,” he said. “We also prepare 75 pounds of potato salad, 50 pounds of cole slaw and 15 gallons of mac and cheese.”

“We are seeing not only locals come by, but we also have quite a number of people who travel here to get our barbecue so the word has gotten out,” he aid. “We are adding new items to the menu all the time and still are able to do a lot of catering.”

If you like barbecue, drive down and have a meal with Manasco and the other employees there. The restaurant is located just behind The Hourglass.