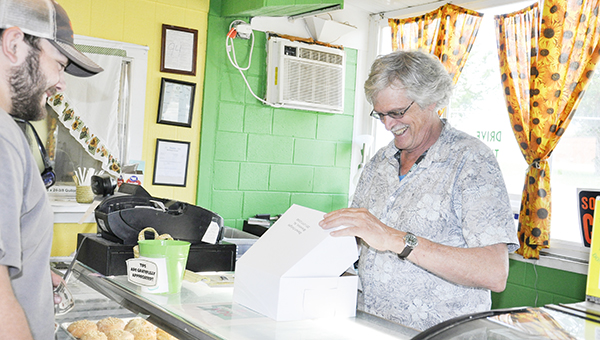 Lydia Grimes | The Brewton Standard
Barry Carraway rings up a customer at Donut Delite on Friday.

Three and a half years ago, Barry and Robin Carraway chose Brewton as a place to set up their business, Donut Delite.

The Carraways did not plan on one day having a donut shop in a small town, but it’s one they have taken to now three locations – Brewton, Atmore and Pensacola Beach, Fla.

“I was a boy from Vicksburg, Miss., who  attended the University of West Florida, getting my degree in business and computer,” Barry said. “I liked the area and decided to make it my home.”

Robin was in the military, but she came from California.

“I was in the U.S. Air Force and was stationed in Pensacola,” Robin said. “I liked it enough that I decided to settle there.”

She served her country and then became a registered nurse, a career that lasted 37 years. At the same time, Barry was working as a mortgage broker.

“When the country started to take an economic down-turn, we knew we needed to take stock and see just what we wanted to do,” she said. “I guess you could say that the Good Lord just led us to the Brewton area.” 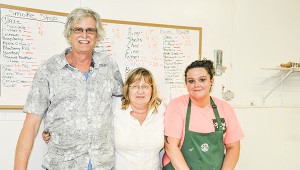 The couple now live a few miles south of Brewton between Berrydale and Jay, Fla. They looked around and found that Brewton did not have a fresh donut shop and thought it would be perfect for them to set up shop here.

“Derrell Simmons, who is our landlord, gave us a good deal here,” Barry said. “He said he had to because his wife, Ann, wanted a good place to buy donuts.

“We have four bakers and three cashiers, and we are open Tuesday through Saturday,” he said. “During the week and Saturday, we are open until what we have is sold out or around 2 p.m.

“On Sunday we open for the church crowd and then close,” he said. “We have several churches that come by and pick up donuts for their congregation, and we have a running account with them. Any church that would like to do that can give us a call, and we will set it up.”

Although the Carraways now have their donuts in several sites across the area, as well as here, they are a small business and not a franchise. Their latest venture has taken them to Pensacola Beach, and everything is going well for them.

Robin said she has learned how to add a couple of extra ingredients to make the donuts have a special flavor that everyone seems to like.

“We are thinking about getting into serving lunches later on by offering sandwiches, but that won’t be right away,” she said.”We also intend to add some new items, such as pies and breads and expanding our cupcake line.”

The couple said they don’t have a lot of leisure time, but when they do, he likes to hunt and is part of a hunting dog club. Robin said she is an avid gardener, both in flowers and vegetables.

“I don’t know how that happened,” Robin said. “I grew up in the California Redwood forrest and never had enough space to do any gardening. That’s what I like to do when I have the time.”

As of today, they have a variety of 35 different donuts on their menu. Not all of them are available at any one time, but they have a pretty good system of letting their customers know what is available.

“We have a text club that one can join and receive a daily list of the things that are on the menu for the day,” said Barry. “When you join, you get two free donuts. Go to 51660 and text donut2. We also have a Facebook page at Facebook.com/donut delite store.”

So, anytime you pass by the Donut Delite and see one of those signs “hot donuts,” just follow your nose and enjoy.