From desk to garden 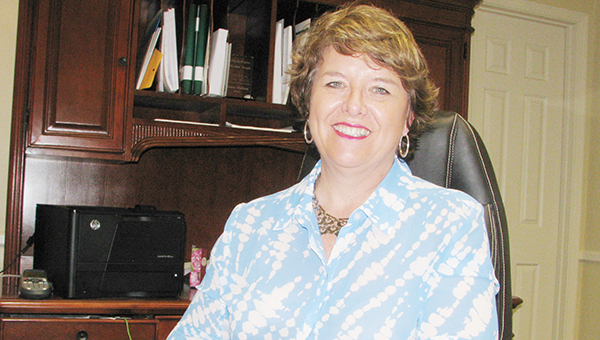 Terece Shehan works at BancorpSouth Insurance, her working home for the past 33 and a half years. But it is this time of the year when she is ready to spend more time working in her yard.

Shehan is not the only one who enjoys digging in the dirt in the spring. She is a member of the Meadorwood Garden Club, which has been active in Brewton for many years.

“We have a wide range of ages in our group,” Shehan said. “We have three generations in our club and it works out great. We can learn so much from some of these older members. I used to be the youngest one but, not anymore. They are a joy to work with.”

There are two garden clubs in Brewton, with the Meadorwood Garden Club being one of them and the other being the Brewton Garden Club.

“The other club is a part of the national garden clubs and we are not,” Shehan said.

The Meadorwood Garden Club has been in existence since October 1972 when a group of friends got together to form a neighborhood club. It probably got its name from the Meadorwood subdivision where it began and it is not “Meadowood,” as many have thought.

“I got my love of the outdoors from my father,” Shehan said. “He grew day lilies, lots of them. I am constantly doing things to change my yard. I got tired of the leaves from the trees falling into the pool so I got rid of the trees. Then the sun was so bad at the pool that I wanted my trees back.”

She is the historian of the club and she collects and keeps the scrapbook.

“Catherine Fountain is the president, and Betty Campbell is the secretary of the club,” she said. “Diane McKenzie is the treasurer. We meet on the first Tuesday of the month.

“We usually have a sale each year of trees and shrubs in the fall, and we have furnished crepe myrtles to our city schools,” she said.

Shehan came to Brewton from Jackson when she was about 10 years old. Her father worked in the wood yard for International Paper Mill and they moved around a lot. At the time he was working at their yard in Castleberry. She attended and graduated from T.R. Miller High School in 1979 and attended Jefferson Davis Community College for a couple of years where she met Tommy Shehan, who was from Evergreen. The two married, and she continued her education at Troy University, getting a bachelor’s degree in management and marketing while working at Brewton Fashions.

Her career at BancorpSouth has covered different departments. Her husband is the administrator at Brewton Medical Center and they have raised two sons, Tyler and Tanner. Tyler lives in Mobile and Tanner lives at Santa Rosa Beach.

When she is not tied up with work or working in the yard, she might just be found painting or crafting in some way. She said she has no particular style of painting but she really enjoys it.

“I also am a pretty good party planner,” she said. “I can throw a party and have planned lots of them for my friends and neighbors.”