He’s letting them fly in Saturday 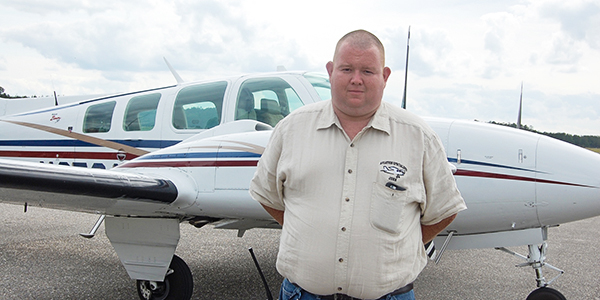 John Farrow is the airport’s fixed base operations manager.

This Saturday, May 14, everyone should be headed to the Brewton Airport for an extraordinary event.

It is the sixth Annual Fly-In at the airport, and those that work there are pulling out all the stops to make sure that everyone has a good time. If by any chance you are not familiar with the airport and its importance to the community, it will be a good time to get educated.

For the past five years, the Brewton Fly-In has brought hundreds of aircraft to the Brewton Airport to make sure that the public is aware of the importance of the facility to our community.

This year promises to be a good one. John Farrow, the Fixed Base Operations manager, said they are expecting around 200 aircraft to show up for the event that begins at 9 a.m. on Saturday morning.

There will be fun planned for the whole family, including airplane rides, military aircraft on display, hot air balloons, helicopters, gyros, ultra lights and much more.

“Our air show is much like a classic car show, and I know they are popular here,” Farrow said. “We will have live music and plenty of food vendors, so everyone can enjoy a nice lunch and spend the day with us.”

Farrow is fairly new to Brewton. He has only been at the airport a couple of months, but his love of aviation is easily apparent when he talks about it.

He was born and raised in Monroeville. Right out of high school, he began working at the Monroeville Airport.

“I left there chasing the money to a job with the railroad,” Farrow said. “It didn’t take long for me to realize just how much I loved aviation. I took a pay cut and left my retirement to return to what I really wanted to do. I have never looked back.”

For the past three years, he has helped with fly-ins and he said he is looking forward to the upcoming event in Brewton.

“There is a lot of misunderstanding about getting into aviation,” he added. “Most people think you have to be born rich or born into the business, but that’s not true. It is a great profession to be in and very rewarding.”

According to Farrow, flying appeals to a wide range of ages.

“We are a tight group of people,” Farrow said. “We look after each other and help each other. My worst day in aviation is my best day in something else.

“Saturday should be a good day,” he added.

There is no charge for admission, but any proceeds will go toward the Vet Jets, a non-profit organization devoted to help veterans.

The airport is located on Airport Drive off of U.S. 41, about three miles south of East Brewton.