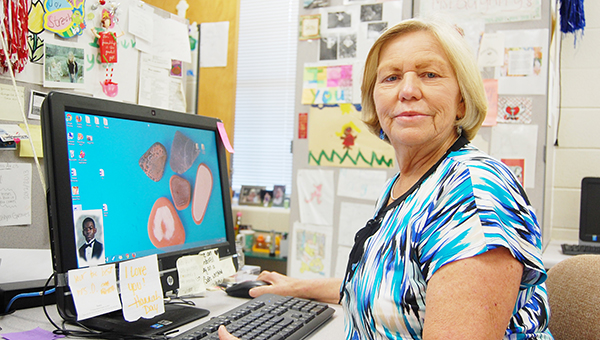 Lydia Grimes | The Brewton Standard
After 32 years, Becky Daughtrey has decided to leave the classroom at W.S. Neal Middle School.

After 32 years, Becky Daughtrey has decided to leave the classroom at W.S. Neal Middle School. She is retiring and making plans to do some traveling.

She won’t be alone in her retirement. After 20 years since the death of her husband, Henry Lee Daughtrey, in 1996, she has been on her own, but that is all about to change. With the help of Facebook, she has reconnected with a high school classmate, Tommy Blair.

“We were in the same class, but we really didn’t know each other,” Daughtrey said. “I have one picture of the two of us at graduation. You know how it is at graduation, when everybody is giving each other a hug.”

No wedding date has been set, but the two of them like to travel and plan to take some long trips and some short ones.

“We got engaged on an Alaskan cruise,” and we hope to go there again, but this time we want to travel some on land. We have a trip planned for Niagara Falls. We could get married on one of the trips, but we want our children to be able to come to the wedding. Now that I am retiring, I can spend more time making plans.”

Daughtrey is a native of Atmore but graduated from W.S. Neal High School in 1972. Soon after she finished school, she was married, and for the next few years she was a stay-at-home mom and wife. She and her late husband have two children, Clint and Jennifer.

“When it came time for Clint to enter middle school, I decided to become a volunteer,” she said. “After that I just stayed on.”

During this time, she had to complete her classes at JDCC in order to get her  associate’s degree. In 1987, she was hired as a special aide in education.

The last 12 years have been spent in the computer lab at W.S. Neal Middle School.

“Before that I worked in several different departments at the school,” she said. “I spent half my life here at the same school. I am going to miss it very much.

“Last summer I got engaged and, although I struggled with the idea of retirement, I knew that the time had finally come,” she said. “Teachers are not supposed to become too close to the students, but I am going to miss each and every one of them.”

Since she and Tommy got engaged, they have planned on seeing as much scenery as they can.

“Last year we tried to find Route 66 and travel down the old highway,” she said. “It turns out that it’s not there anymore. Only parts of it still exist. Interstates have taken over.”

They haven’t set a date for the wedding yet, but Daughtrey said as soon as the logistics can be worked out for their combined families, they will settle on a marriage date. Between the two of them, they have four children and five grandchildren, so it may take a while.

“I am retiring but I will be available if they ever needed me to work a few days.”

Both she and Tommy are entering a new phase of their lives, and they look forward to what the future holds.