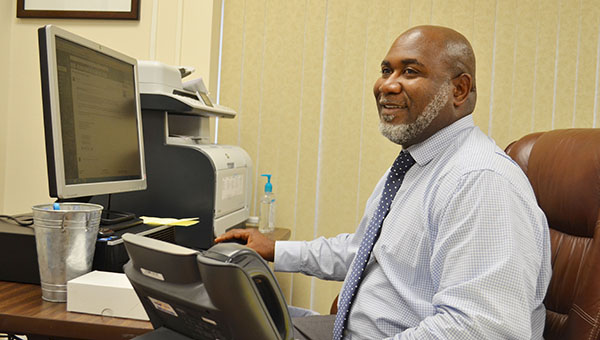 Lydia Grimes | The Brewton Standard
Eric Andrews sits behind his desk Monday as he gets ready to start his day.

Eric T. Andrews is not new to this area. He has been the senior pastor of Baptist Hill Baptist Church on Sowell Road for the past eight years.

“Although I don’t live in Brewton, I feel as if I do,” Andrews said. “I have been coming down here for a long time to pastor the church, but now I have another reason to drive down here from Burnt Corn.”

Andrews has worn many different hats getting to where he is today. In addition to his career in education, he has been a church pastor and a deputy sheriff, patrolling with both the Monoreville Police Department and the Beatrice Police Department.

He was born at Peterman in Monroe County and now lives in Burnt Corn. He attended school in the Monroe County School System; Beatrice Elementary School, Monroeville Junior High School and graduated from J.F. Shields High School in Beatrice.

He entered the U.S. Army in 1990 and served on active duty for four years. He then spent two more years in the Alabama National Guard.

He began working with youth and realized he wanted to work in the ministry and was ordained in 1995.

“I love the kids,” he said. “Most of the time I was either teaching or counseling the younger children. Every school is different, but I want to work at it a while before making any big changes.

“Sometimes there is no need  to make any changes at all.,” he said. “If it’s not broken, don’t fix it. Most of my teaching has been with the elementary age students, so I am right where I want to be. I am looking forward to working with the younger kids again.”

Andrews’ wife, Teresa, is also a teacher. She teaches at Evergreen Elementary School. The couple has six children; one is working, one is a senior in high school, two are in college at A&M at Huntsville, and a set of twins who are still in elementary school.

“We still live in Monroe County, at Burnt Corn,” he said. “The commute is not bad and we love to live there.”

Andrews is the senior pastor at Baptist Hill Baptist Church here in Brewton and has been for eight years.

Andrews said when he has the time, he loves to hunt and fish, but with all of his commitments, he doesn’t get to do that as much as he would like. For someone who is as involved as much as he is, it’s a wonder he ever gets any chance.