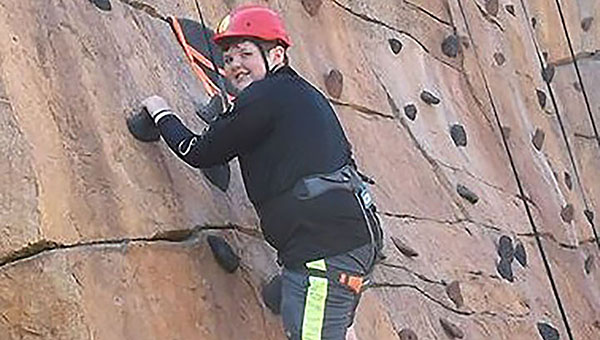 Houston Hartley  at the Summit Bechtel Reserve in West Virginia.

No location was off limits as Boy Scout Troop No. 42, chartered by the Brewton First United Methodist Church, experienced summer adventures throughout the U.S.

“They participated in a wide range of activities at both camps, and earned a variety of merit badges from motor boating to archery,” he said.

The enthusiasm for scounting was apparent when talking with Scout Dean Thelen, who also participates with his brother, Jacob. 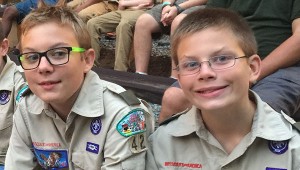 “Getting the Aviation Merit Badge was great,” he said. “I now have the opportunity to go back and fly with my instructor in the future,” said Dean Thelen.

Troop No. 42 is a strong supporter and heavily involved in the Order of the Arrow, Scouting’s National Honor Society. Two members took advantage of once in a lifetime opportunities offered by that organization.

Houston Hartley attended the PRISM event at the Summit Bechtel Reserve in West Virginia. Eight members from each local lodge were invited to attend a special dedication of the newly constructed national Order of the Arrow ceremony circle at Scouting’s newest high adventure base.

During the four-day adventure, participants participated in various service projects to benefit future generations. Hartley’s project was constructing a rock retaining wall along a new roadbed. In addition, he was able to participate in many of the program areas offered at the Summit such as rock climbing. On the return trip home he visited the New River Gorge.

Hartley was one of only 1,200 Order of the Arrow members selected from its 250,000 membership as a “change agent” to attend NEXT at Indiana University just two weeks after returning from West Virginia.

The Order of the Arrow celebrated its 100th anniversary in 2015, and NEXT was designed as an event to bring together the next generation of leaders that will serve as agents of change to chart the strategic plan for the group’s future. Placed into crews of approximately 10-12 youth from all over the country, the participants lived, ate and learned together, sharing best practices from their local areas, and developing personal leadership skills.

“It was a very moving experience,” said Hartley.  “Even though I was one of the youngest people there, I was able to interact with leaders from all over the country and discuss ways that we will each impact and lead the Order of the Arrow into its second century.”

Hartley currently serves as the Chapter Chief for Escambia, Monroe and Conecuh counties. His father and Scoutmaster was also in attendance serving as a key national staff member for the event.

Chris Guthrie, a senior at T.R. Miller had the most varied and intense summer of all the Scouts.  While attending the 2015 National Order of the Conference last summer at Michigan State University, he submitted an application to take part in the 2017 Order of the Arrow High Adventure Program.  In that program, participants attend one of Scouting’s four national high adventure bases for a two week program. The first week involves providing service to the base and in return the second week involves participating in a high adventure trek at the facility.  Hoping he would be selected to attend just one, Guthrie was elated to later find out he was selected to attend all three to which he had applied.

The day after school was out, he traveled to the Florida Sea Base in Key West, Fla., to participate in the OA Ocean Adventure. The first week involved camping and service projects along the beaches of several of the islands in the Keys. Following a week of service, his crew boarded a large sail boat which they manned, lived on and sailed for the next week.    In addition to learning how to sail the large craft, participants were able to snorkel, kayak, paddleboard, fish and enjoy the waters around the Dry Tortugas.

In July, upon his return Guthrie participated in the Canadian Odyssey Program out of the Northern Tier National High Adventure Base in Ely, Minn., which focuses on the Boundary Waters Canoe Area Wilderness in the Superior National Forest in America and the Quetico Provincial Park in Ontario, Canada.

The final leg of his summer was participating in the Trail Crew program at Philmont Scout Ranch in Cimmaron, New Mexico.

“It is hard to describe in words the experience that I had this summer,” he said. “I was able to spend almost six weeks in three very different beautiful wilderness settings.  It was a humbling experience to know that work that I helped perform will benefit Scouts and outdoorsmen for many years to come.

“It was just completely awesome to be able to enjoy and experience so many things that I had never done,” he said. “I would never have had these opportunities had it not been for Scouting.”

In addition to his cross county high adventures, Guthrie was one of the Scouts who attended summer camp.  He also found time to work on his Eagle Scout project which involves the construction of a pavilion at the John L. Fischer Center in Brewton.  The Eagle Scout candidate hopes to complete his project over a series of work days this Fall.

Troop No. 42 meets Monday at 7 p.m. at the Scout Hut adjacent to the parking lot of the First United Methodist Church and is open to all boys between the ages of 11-17. For more information contact Scoutmaster Wade Hartley at wade.l.hartley@gmail.com.