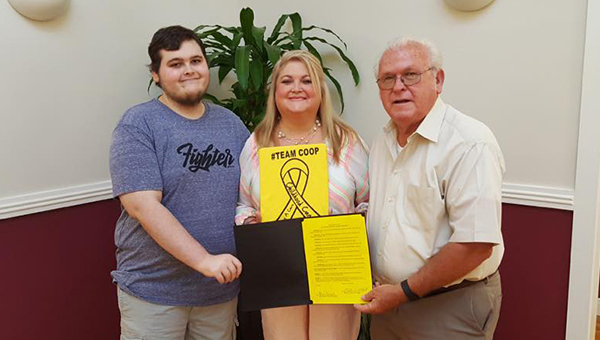 September has been designated as the month to bring the fights of those children battling cancer of all types.

Unfortunately, that’s a subject Flomaton’s Janet Little Cooper and her son, Bryant, know all too well, and it’s because of their first hand experience, they – along with the Escambia County Commission – are asking area citizens, schools and businesses to show their support with gold ribbons.

Bryant, now 19, was diagnosed with Stage 4 Neuroendocrine Cancer in the later part of 2014. At the time of his diagnosis, his cancer had spread throughout his entire body – head to toe – making it inoperable. He has been seeing a Neuroendocrine specialist in New Orleans for a year but getting treatment in Pensacola.

“Bryant stopped chemo in March knowing he had no other options,” Mrs. Cooper said. “Out of desperation I called his New Orleans doctor and asked about immunotherapy, a new innovative treatment for cancer. Even though it has never been used on Bryant’s type of cancer, the doctor agreed. Insurance, however, did not.”

But that wasn’t the end of the road for the Bryant family. A partnership between the teen’s New Orleans and Pensacola doctors allowed for Bryant to receive treatment in Pensacola. Today will mark his eighth treatment, and one step closer – his family prays – to remission.

It’s the Coopers’ story, and the millions others like it, that serves as the motivation for childhood cancer awareness month.

“I had no idea children could get cancer before my own son did,” Cooper said. “I will never be able to describe the emotions I felt when we were first told. I remember the oncologist picking up a box of tissue and handing it to us before she walked out of the room to give me and Bryant some time to ourselves. I just remember us both crying.”

Cooper said she learned quickly that a lot of children have cancer, and “It is a horrible sight to behold, especially when it’s your own child.”

“Childhood cancer is not just one specific cancer,” she said. “There are hundreds of sub-types that fall under that name; therefore, childhood cancer has little awareness and a lot less funding than other cancers – which is what makes this proclamation so important.”

Cooper said the National Cancer Institute (NCI) only designates 4 percent of its $5 billion budget to childhood cancer, while other cancers are given $600 million for research each year.

“I want the world to know that my son is worth so much more,” she said. “He has fought unheard of battles against this disease. He deserves so much more.”

In other business, the commission:

• heard a request from Everett Watson, executive director of Epilepsy Advocates of America, for $2,000 to provide seizure response training to first responders;

• approved agreements with the state Administrative Office of Courts for court referral officers and with the department of youth services for long-term detention services; and,

• approved an agreement with engineering services for the state transportation alternative grant for sidewalks on the Poarch reservation.

Saved by a coin