James “Jay” Kennedy, 82, passed peacefully at home on Oct. 3, 2016, to be with his Lord and Savior and join his wife of nearly 60 years, Lois Johnson Kennedy. 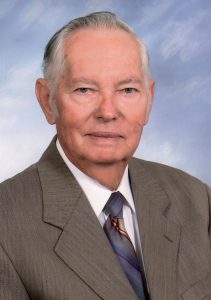 Burial will follow at Serenity Gardens on Stewart Street in Milton.

He was born in Brewton on June 17, 1934, to Marvin and Sara Ruth Kennedy.  There, he attended T.R. Miller High School, worked as a delivery man for a local grocery and met the love of his life, Lois Johnson.  They were married on March 14, 1954 at Poplar Dell Baptist Church.

He worked as a floor mechanic in Mobile, before hiring on with Monsanto in 1955 where he worked until his retirement in 1991.

He enjoyed water skiing, fishing, golfing and hunting as well as many other outdoor activities. He was a true craftsman and handyman who was skilled in carpentry, mechanics, woodworking, and landscaping.

He is survived by his children and their spouses; Stephen and Sharon Kennedy, Nina and Maurice Radford, and Paul and Dorothy Kennedy.  His grandchildren include Amanda Bianchi, Jessica Harris, Megan Matson, Derek Kennedy, Morgan Radford and Ricky Page; along with 11 great-grandchildren, all of whom he loved and cherished dearly.

He is also survived by his sisters Barbara Harvey, Sara Mantel and Linda Chandler.  He was preceded in death by his brother, Marvin Kennedy, Jr.; and his sister, Elvis King.

In lieu of flowers, donations may be made to the American Cancer Society at donate.cancer.org.

He was born Feb. 10, 1931, in Brewton. He was united in matrimony to the late Fannie Riley Sanders and to this union four children were born.

“Lightin” as he was affectionately called, was a faithful member of the Apostolic Truth Tabernacle Church where he loved to play his harmonica and dance under anointing of the Holy Ghost. He also loved to sing. His favorite songs were, “Pray on my Child” and “Trouble in my Way.”

He had always had a word from the Lord to share with everyone. He loved his pastor and his church family and they loved him.

He enjoyed farming and collecting all different types of items. His favorite saying was, “I wasn’t propped up, I was brought up.” His motto kept him going each and every day.

He is preceded in death by his parents, John C. and Claudia Sanders; two sisters, Eunice Thomas and Ruby Watson; and three brothers, Clarence, Albert and Nathan Sanders.

She was born in Brewton and was a lifelong member of Santa Rosa County where she was employed as a school bus driver for the Santa Rosa County School System.  She was a loving, caring mother, sister, aunt, wife and friend.

She was thoughtful, selfless and had a great love for her family and friends.  She never met a stranger and she will be deeply missed by all that knew and loved her.  She was of the Christian faith and a member of Cornerstone Christian Church.

She was preceded in death by her parents, Isabel and Mack Nelson; two brothers, Daniel Nelson and Lawrence Earl Nelson; and one sister, Mary Agnes Nelson.

In lieu of flowers, contributions may be made to the family.

Mae Jean Parker Wright, 79, of Williamson Street in East Brewton passed away Tues., Sept.27, 2016, at her residence after a brief illness.

She was a native and life long resident of Brewton and East Brewton. She was of the Baptist faith, a 1954 graduate of W.S. Neal High School and a retired house keeper from West Gate Village Nursing Home where she served 13 years.

Genevia Annie Mae Merritt, 62, of Merritt Road in Castleberry passed away Tues., Sept. 27, 2016, in a local hospital after a brief illness.

She was a native of Brewton and a life long resident of Castleberry. She was of the Holiness faith.

She is preceded in death by her parents, Andrew Jackson and Annie Kent Merritt; and sister, Ruthie Mae Coleman.

Laurie Colleen Wedell, 85, of Dixon Nursery Road in Brewton, passed away Sat. Oct. 1, 2016, in a Greenville nursing facility after a brief illness.

She retired from the State of Alabama DHR office with 17 and a half years of service. She enjoyed making Bible class material.

She will rest peacefully in her birthplace of Bradley.

In lieu of flowers, donations may be made to HPH Hospice Care Center, 2939 West Gulf to Lake Highway, Lecanto, FL 34461.

Visitation will be held today, Oct. 5, from 6 until 8 p.m. at Williams Memorial Chapel Funeral Home.

He was a native and life long resident of Brewton. He attended Damascus Assembly of God Church, was a 1966 graduate of W.S. Neal High School, and was a retired crane operator from Container Corporation/Georgia Pacific of America with 40 years of service. He enjoyed fishing, hunting, farming, dirt track racing, and was an avid animal lover.

He was preceded in death by a daughter, Sherry Michelle Cole.