On Oct. 5, 2016, our Lord and Savior called to Heaven the light of our family, Hazel White Moulder. 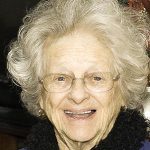 She was born in Atkinson Co., Ga., March 12, 1927 to John G. and Allie Mae White. She married George Donald Moulder and after the birth of son Donnie and daughter Linda, they moved to Fernandina Beach, Fla., and lived there until 1957 when they moved to Brewton. She moved to Wenatchee, Wash., in 2006 after the death of her husband.

She was a woman of deep faith who enjoyed reading her bible throughout her life and attending Damascus Assembly of God Church. She was an avid Atlanta Braves fan and loved watching any sport on TV.

She loved fishing and being outdoors working with her flowers and plants. She was an excellent cook and was especially known for her delicious cakes. She was an inspiration to so many people throughout her lifetime.

Her family meant everything to her and she was always there to help when needed. She was a natural caregiver and a selfless woman.

She was preceded in death by her parents; her husband, George; her son, Donnie Moulder; two brothers, Johnny and Glenn and three sisters, Lucille, Melda and Sarah.

She was born in Escambia County, and had been a resident of Repton for the past 70 years.  She was a homemaker and was the former minister of McGougin Chapel and attended Oak Grove Holiness Church prior to her death.

Share your memories and condolences with the family at craverfh.com.

A memorial service was held on Sun., Oct. 9, at 3 p.m. at Brewton’s First United Methodist Church with the Rev. Tony McCullough officiating.

She was born in El Reno, Okla., and had been a resident of Brewton for the past four years.  She was a homemaker and was a member of Brewton’s First United Methodist Church.

He was a native of Atmore and a life long resident of Brewton. He attended W.S. Neal High School.

He is preceded in death by his grandfather, Memphis Bo Riddle.

Mae Jean Parker Wright, 79, of Williamson Street in East Brewton, passed away Tues., Sept. 27, 2016, at her residence after a brief illness.

She was a native and life long resident of Brewton and East Brewton. She was of the Baptist faith, a 1954 graduate of W.S. Neal High School and a retired housekeeper from West Gate Village Nursing Home where she served 13 years.

Interment followed in Bethel Cemetery in Brewton, with military honors.

He was born in Memphis, Texas, and was a lifetime resident of the Brewton community where he was a graduate of the 1965 class of W.S. Neal High School.  He was a veteran of the United States Air Force as a Sgt. having earned the National Defense Service Medal, Air Force Outstanding Unit Award and the Good Conduct Award.

During his working years, he worked as a shipping supervisor at Georgia Pacific.  He was an avid Alabama, Texas Longhorn and Texas A&M fan.  He was of the Baptist faith and was preceded in death by his parents, Todd and Eleanor Ridings Fuqua.

He is survived by his sons, Cody Fuqua of Brewton, and Denver Missel of North Dakota; a daughter, Shanna (Keith) Skiba of Brewton; mother of his children, Teresa Fuqua of Brewton; brothers, Johnny Fuqua of Gadsden, and Michael Fuqua of the Bethel community; sisters, Sandra Fuqua of Montgomery, Karen Watson of Skellytown, Texas, and Tammie Ralph of Borger, Texas; and grandchildren, Nataleigh Fuqua, Coley Fuqua, GraceLynn Skiba, Damien Missel and Donovon Missel.