When thinking about Veteran’s Day, one is reminded of someone whose name has been associated with veterans for many years. Joe Dozier attends all the programs having to do with the veterans of Escambia County. He is very faithful in his support of veterans and members of the American Legion. 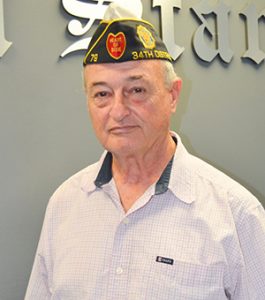 Stephanie Nelson |
The Brewton Standard
Joe Dozier attends all the programs having to do with the veterans of Escambia County.

“Both my father and my grandfather were veterans,” Dozier said. “My father was in the U.S. Navy and served in the South Pacific. My grandfather served in France in 1917 during WW I.”

The American Legion is a service organization which began in 1915, and was recognized in 1919. Today there are more than two million members operating in the United States and even some overseas. The local unit is the Claude McCall Post No. 79 here in Brewton. Dozier is the current Commander of Post No. 79.

“I probably hold my position by default,” Dozier said. “We don’t have very many members and I have been here a long time.”

The membership is not very large, and Dozier said their door is open to anyone who is a veteran and wishes to contribute their time and energy. They are welcome to join the local group.

“One of our missions has been the support of the Boys and Girls State programs and we have been doing that for the past 36 years.” he said. “The students go to the University of Alabama for a week where they learn the process of how our government works. We also fold the U.S. flag to be given to the families of deceased veterans.”

On Veteran’s Day, members of the organization will visit the local schools and nursing homes to present programs in honor of our veterans. They also see that programs are presented on Memorial Day at the Escambia County Courthouse to honor those veterans who are no longer with us.

One of the main duties of the American Legion is to see to the implication of the G.I. Bill of Rights, and to furnish information and support for veteran hospitals.

“We support the wives and children of veterans,” Dozier said. “We sponsor sports teams and other programs in the schools. Every veteran is welcome to be a part of the program. For more information, contact me (Joe Dozier) at 809-4200.

Veteran are all just ordinary people who have been caught up in extraordinary circumstances.”

Dozier is a native of Brewton and graduated from T.R. Miller High School in 1967. He entered the military in 1971 and remained until 1974.

“For some reason, they thought I was smart so they put me in an army medical unit and I was stationed in Hawaii,” he said.

He came back from service and attended the University of South Alabama, where he received a degree in biology. He opened the Brewton Dental Clinic in 1981 and has been there ever since. He said he has no plans to retire.

He, and his wife, Beverly, have four daughters, Melissa, April, Christy and Brittany. They have six grandchildren.

“I love to be outside,” Dozier said. “Anytime that I can I am out hunting, fishing, or just being outside. My greatest joy these days is playing outside with my granddaughter, Ryleagh. I have a blueberry farm that I take care of. I attend church at First Methodist Church in East Brewton and sing with the church group, Joyful Noise.”

Brewton and Escambia County are honored to have Joe Dozier be so involved with the veterans of the past and those who serve even today.