Born and raised in Brewton, he was a graduate of W.S. Neal High School, then attended broadcasting school in Tennessee which sparked his lifelong love of journalism. 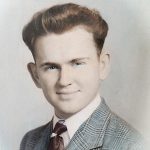 His soothing “radio voice” served him well over his lifetime as he hosted and promoted gospel programs (both on air and stage), and emceed countless pageants, school functions and community events. He only recently retired from KJAE Leesville in 2014 at the age of 84. He also proudly served in the U.S. Army at Fort Jackson, S.C., during the Korean War as a stern but compassionate drill sergeant.

He also enjoyed many years in print journalism, starting with a printing press in Jay, Fla., and eventually starting his family-owned/operated Milton Times newspaper during the 1960s.

After moving his family to Louisiana in 1969 as an employee of West Brothers Department Stores, he carried on his ministry by working with his First Baptist Church families in both DeRidder and, later, in Leesville. He began televised Sunday school programming and church services that still air today, benefiting many unable to attend. He further aided his community by serving on the Leesville School Board for 11 years, retiring in 2014.

He was preceded in death by his parents, George and Stella Thompson Harris of Brewton; and previous wife, Helen Jean Butts Harris, also of Brewton.

“Rest peacefully our patriarch, your job was marvelously done. “If I can put one touch of rosy sunset into the life of any man or woman, I shall feel that I have worked with God.” –George Macdonald

He was a native of Columbus, Ga., and a long time resident of Brewton. He was of the Methodist faith and a 1972 graduate of W.S. Neal High School , where he played football and baseball. He was employed as a sales rep at Marvin’s Hardware Store.

She was a native and life-long resident of Brewton. She was a graduate of W. S. Neal High School, an employee at Monsanto as a machine operater for 20 years and a caregiver in the health industry. She attended Bethel Mennonite Church and  enjoyed cooking.

She is preceded in death by daughter, Deborah P. Rowell; and two grandchildren, Kirk Thompson and Tracy Thompson Lee.

Funeral services were held on Thurs., Nov. 10, at 11 a.m. from the chapel of Craver’s Funeral Home with Bro. Billy Hodges officiating. Interment followed in Buffington Cemetery.

She was a native and lifelong resident of Castleberry.  She was a homemaker and was of the Holiness faith.

She was preceded in death by her brother, Billy Ray Hobbs.

She was a native of Jay, Fla., and had been a lifetime resident of the Brewton community where she was a homemaker and a member of Halls Creek Missionary Baptist Church.

Memorial services will be announced and held at a later date and time with Williams Memorial Chapel Funeral Home in charge of arrangements.

He was a native of Indianapolis, Ind., and a long time resident of Alabama.

He was a U.S. Navy Veteran and was employed as an AB tankerman with Martin Transport.

He is survived by his wife of 42 years, Ramona Nelson Duty of Brewton; and stepson, Donald Wayne Coffey of Brewton.

She was a native of Virginia, a former resident of Missouri, and a long time resident of Brewton. She was a member of the Wallace Baptist Church and a former machine operator at Sheltex.

She is preceded in death by her father, Clifton Haveard; mother, Doris Wilson Haveard; and two brothers, Doug Haveard and Mike Haveard