It’s beginning to look like the Christmas season is just around the corner. Stores have been stocking up with all the good things that make for a jolly-happy Christmas.

Looking around town one would hardly guess that the post office is one of the busiest places in town.

Monica Fountain, the postmaster for the Brewton Post Office, said this is the busiest time of the year for them and they want everyone to know that they are ready. With four clerks working in the main office and as many as 20 trucks hitting the road at the same time, Fountain said they believe they are ready to face the busy time. 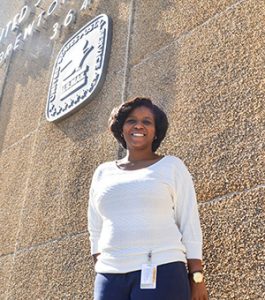 “Things have changed over the years,” she said. “We don’t deliver as many letters as we once did because of the availability of email and cell phones, but we make up for that with the number of packages we ship each day. More and more people are shopping on line and we are here to get the goods delivered where they need to go.”

Statistics show that the busiest mailing date is expected to be Dec. 19, with more than 611 million pieces of mail to be processed. More than 30 million packages will be delivered on Dec. 22.

“The average daily volume is 508 million pieces, but during the holidays they workers expect 525 million pieces daily,” Fountain said. “We will be on the job right up to the last minute so those late arrivals will still be delivered on time.”

Not only does the post office take care of things such as Christmas cards, they have a Santa’s helper on hand during the holidays to take special care of those Santa letters.

“This makes the 104th year of the Operation Santa program,” Fountain said. “We have been able to work with lots of volunteers and postal workers to make sure that the letters are read and answered as best as can be.”

Fountain was born and raised in Brewton. She attended W.S. Neal and graduated in 1994.

“I went off to college, but soon found out that college was not for me.”I came back to Brewton and worked at a few different things before I took the test to work with the post office. I scored high enough that I got a part-time job with the service. I decided to try to get on full-time and went through training in Birmingham and got a job as supervisor at Atmore.”

She was then hired and promoted to postmaster at Evergreen for the next four or five years. She got a chance to come back a few months ago as the postmaster of the Brewton Post Office.

She is a very busy lady. Not only does she handle the day to day job at the post office, she is the mother to six children.

Justin Floyd is 22 and works at the Brewton Country Club. Kelana Floyd is 19 and a college student attending Faulkner College in Montgomery on a basketball scholarship. Dominique Floyd is 15 and a student at W.S. Neal. She is also a majorette at the school.

The three younger children are all “gift’s through the ‘foster parent program.’ Chasen is seven, Ethan is five and Cameron is four.

“I am really busy but I love what I am doing,” Fountain said. “I am grateful that I was able to come back to Brewton and work at a job that makes a difference. A package weighing 70 pounds and less can be sent by mail and we recently got 13 boxes from Brewton Elementary School to send to a military unit in Afghanistan.”