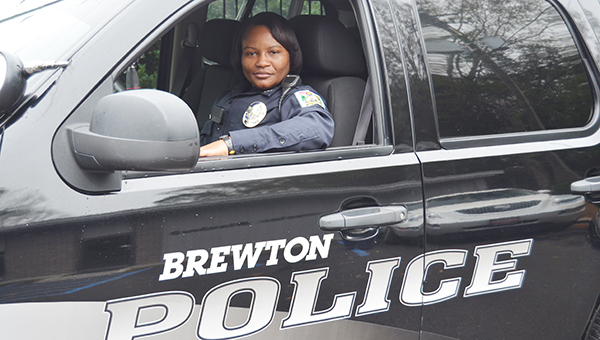 Some people work all their lives doing jobs they can’t stand. It’s always better to work at something they love.

Brenda Lane is one of those who has found her niche in life. It took her a few years to get it all together, and worked at several jobs before finding her way to the Brewton Police Department.

Lane hasn’t been there long but she is happy in her current position.

“I love my job,” she said. “Most of the time I am like a resource officer at Brewton Elementary School and when school is not in session, I go on regular patrol with the department.

“One of my jobs is to see to the safety of the kids, but it’s more than that,” she said. “I am available to keep an eye on the children, and be there if any of them need me. It’s sad to say, but sometimes children have problems, not only in school, but also outside of school. They trust me and know that I am there to help them if I can.”

Lane was born and raised in Wilcox County and graduated from Wilcox County Central High School in 1996. She came from a large family of seven girls and one boy.

“It is a lot different working with the kids than it was in a maximum prison,” she said. “During school sessions, I work at Brewton Elementary School. I am there for whatever they need.

“I walk the halls and check what ever they are doing and make sure that everything is calm and quiet,” she said. “Sometimes they need someone just to listen to them and answer various concerns they have. I have learned most of them and they know that I am their friend.”

When school is not in session, Lane goes back to her patrol car and turns to regular police duties. She, like other officers, wears a gun, ammunition, flashlight, stun gun, two-way speaker, and more recently, a personal camera. Under all this equipment, she is also outfitted with a protective vest, which makes for a lot of work just carrying all that stuff around.

“When (BPD) Chief (Monte) McGougin assigned me to the job at the school he wanted to see if it was something that I would like,” she said. “I did, and still do, like it very much. I get enough time on patrol and you never know what will happen next.

“I try to be kind and friendly, but still do what I have to do,” she said. “I believe in showing respect but I am not a pushover.

“I want to be helpful and sometimes that calls for a little bit of kindness. I also want to treat everyone with respect. There is no need to come down hard on everyone and it’s not necessary all the time. But when it’s needed, I can do it,” she said.

Lane said when she was new to the force she stopped a speeding vehicle, only to find out it was Sheriff Grover Smith.

“I was new at the time and didn’t know a lot of people,” Lane said. “He wasn’t too happy about me stopping him, but he called me the next day and complimented me on making the stop. He told me I handled myself well and I did the right thing. He said that if he had been hard on me, he was sorry, because I was in the right.”

After that experience, Lane should be ready for whatever comes along.

She met her husband, Steven, while she was working at Fountain, and they have three children, Tandanesia (14), Stephen (10) and Samuel (8).