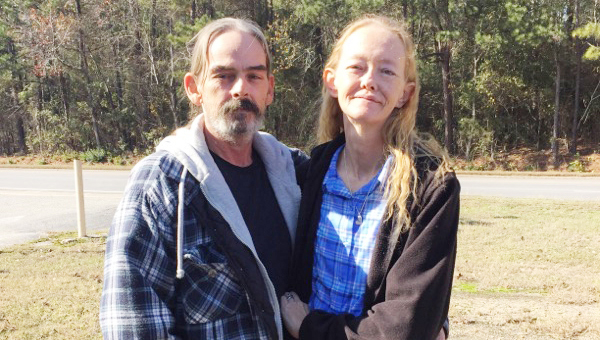 Nicole Burns |
The Brewton Standard
Connie Frazier and her husband, Troy McNeil, and their children are living in a hotel after the fire.

“You don’t realize just how caring and giving people are until something like this happens.”

Connie Frazier said the tragedy of losing her home to fire has changed her perspective. Not just on life, but on the kindness of the people in her community. Nearly one month later, as the family struggles to get back on their feet, their neighbors continue to pitch in to help.

It was a cold and rainy Sunday morning, Dec. 4. Frazier and her 12-year-old son were at home asleep when something caught fire in the shed attached to their home on Jay Road. Her husband, Troy McNeil, had left earlier that morning to help his grown son in Atmore. The couple’s 14-year-old daughter had spent the night with her aunt.

“I heard a bunch of people yelling in the yard, and I thought Troy was home yelling at the dogs so I get up to go see,” said Frazier. “I noticed it was smoky in my room and I thought, ‘What in the world?’ So when I go into my living room, you couldn’t see the front door. The front door was standing wide open where my son had run out.”

As you can imagine, Frazier was in shock.

“There were some people to stop when they saw my son on the front porch,” said Frazier. “I don’t know who they were. They were the ones who called 911. One of them even grabbed my water hose and tried to put it out, but it was too tall. The water hose wasn’t going to do nothing to that, but he did try.”

One of the Good Samaritans lent Frazier his cell phone so she could call her husband and let him know what was happening. The second call she made was to her parents. Frazier ran out of the home in her pajamas and her son in his jeans.

“I was just in disbelief with how and what,” said Troy McNeil. “She borrowed the guy’s phone to call me. He called me back about 15 minutes later and told me that they were okay and everything so that made me feel better. Still, I made a 45-minute trip in 25 minutes.”

Even with help on the way and firefighters called, Frazier could do nothing.

“If it wasn’t for my little boy though, there ain’t no telling. He’s the one that woke up and run outside and got the help,” said Frazier.

Even with the cold drizzle falling, it was no help to fight the fire. And since the couple didn’t live near a fire hydrant, the very water firefighters needed to save the house was in short supply.

“When I got there, most of the house was still there,” said McNeil. “It was a small fire, but they were out of water. So, we had to stand there and watch the rest of it burn.”

As much as the family has lost, they have gained more faith in their community.

“The fire trucks had just pulled off and people went to stopping,” said McNeil. “They were just riding down the road and would see it and would stop,” said Frazier. “My sister asked me if it would be OK to post some picture on Facebook. Me, still in shock, I said, whatever. It went like wildfire. I couldn’t even keep it straight for a week. The day it happened, my mom’s living room filled up with bags of clothes.”

Family, friends, and neighbors have offered clothing, furniture, and household items to the family, which presents a new problem. “I don’t have nowhere to put it,” said Frazier. “Once I find a house, I will let everybody know.”

Up until this point, the family found residence at a local motel, but that time is now up.

“I meant to have us in a house before Christmas for my kids,” said Frazier. “I wanted them to wake up in their own home. Not in a motel room, but that’s better than nothing. At least we’ll be all together.”

“Right now, we just want to stay together for Christmas. This motel room is what’s doing it. Each day is a guess,” said McNeil. “This morning, we had enough to pay for one more night,” said Frazier.

“Everyday, it seems we run into people who will just come up to us and say, ‘We heard what happened. Here is a little bit to help.’ We take that and buy another night,” said McNeil. “After Christmas, whether we can afford this or not, we’re going to move on and do what we’ve got to do.”

The plan is to temporarily split the family between three relatives until they can move into their own home again. “Our families have offered to let all of us stay,” said Frazier. “It’s not that anybody is making us split up. They’re already in small homes and you add a second family to it.” “They’re already overcrowded,” said McNeil.

Accepting help from family, friends, and even total strangers has proven challenging for Frazier.

“I’m they type, even though we lost everything and I knew that I needed the stuff people were offering me, I felt deep down like I was taking advantage of people.

“Even though I wasn’t and I’m not, I still feel people will think that I’m still wanting pity and it’s not that,” said Frazier.

The family has been shown several options for housing over the last few weeks, but they said they have to consider the cost down the road.

Despite the challenges of starting over, the Frazier-McNeil family said they’ve been overwhelmed by the outpouring of love and kindness from the Brewton and East Brewton community.

“You don’t realize just how caring and giving people are until something like this happens,” said Frazier. “It really was a shock to me to see everybody pull together. It’s really, really changed my perspective a lot.”

“I would like to thank everyone, everybody that’s helped us, everybody that came to help, all the firefighters,” said McNeil. “Even though it was cash from hand to hand, we didn’t waste it. We stayed together. That to me is more important than if somebody moved out of their house and gave it to us. Just because we were still able to be together.”