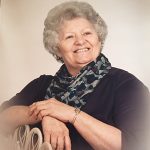 Funeral services were held at McDougald Funeral Home in Anderson on Tues., Jan. 3, at 2 p.m. Interment followed in Forest Lawn Cemetery in Anderson.

She was born in Pulaska, Va., to two Church of God preachers, and was one of 10 children. She was a long-time resident of Anderson and a member of McDuffie Street Church of God, where she was involved in the Young at Heart and youth ministries and taught Sunday school. She enjoyed visiting the elderly in the local nursing homes. Her favorite thing to do was to spend time with her family.

She was preceded in death by her husband, Roy Williams.

She was s wonderful God-fearing mother, who dedicated her life to the Heavenly Father and her family. She devoted her life to teaching her children and family to also do the Lord’s work. Our mother was an active prayer warrior for her family and many people. She also worked at the West Gate Village Nursing Home in Brewton along with several other jobs over the years. She made many friends over the years that love her also. She cared more for others, always listening and giving anyone a word of encouragement. She enjoyed reading her Bible, family time and cooking. She will be greatly missed by her beloved grandchildren, great grandchildren, nieces, nephews, family and friends.

Antoinette Andrews was welcomed into the Kingdom of Heaven on Mon., Dec. 26, 2016.

She was lovingly known to many as “Nette.” She was the sixth child born to Herman Thomas Sr. and Sylvia Dorothy Thomas on June 28, 1958, in Conecuh County. She attended Castleberry High School and later T.R. Miller High School when her family moved to Brewton. She was a devoted wife; a loving, nurturing and protective mother, and proud grandmother. She will always be remembered as a woman of unwavering faith who lived, laughed and loved.

She is preceded in death by her parents, Herman and Sylvia Thomas; and siblings, Ray Thomas, Herman Thomas Jr., Katherine West, Bryant Thomas and Ronnie Thomas.

Funeral services were held on Sat., Dec. 31, at noon from the chapel of Craver’s Funeral Home with Minister Steve Parker officiating. Interment followed in Cooper Cemetery.

She was a native and life-long resident of Escambia County. She worked as a lunchroom worker for both North Brewton and Neal schools for 25 years.  She attended L Pond Church of Christ.

She was preceded in death by her parents, Esley and Ella Blair; and siblings, Mattie Mae Brantley, Pete Blair, Bill Blair and Lillie Mae Buckhault.

She is survived by two brothers, Estle (Jean) Blair and Red (Bobbie) Blair, both of Castleberry; three sisters, Shirley (Sherman) Allen of Brewton, and Ruthie Bell (Darell) Mitchell and Nellie Ann (Wendell) Campbell, both of Castleberry; and a number of nieces, nephews and other family members.

He was a native and life long resident of Brewton. He was a member of the Zion Hill Baptist Church, a 1970 graduate of W.S. Neal High School, a U.S. National Guard veteran, and a retired Millwright from T.R. Miller Mill Company with 35 years of service. He was an avid hunter and fisherman. He enjoyed handyman work.

He is survived by his wife, Jan Bondurant Salter of Brewton; and son, Matt Salter of Tuscaloosa.

He was a native and life long resident of Escambia County. He was of the Holiness faith and a retired logger.

He was preceded in death by his parents, Ebbie and Bama Johnson Lucas; and siblings, Ralph, Cleve “Coot”, Robert, Shorty, Roy, Eunice and Allie Mae.