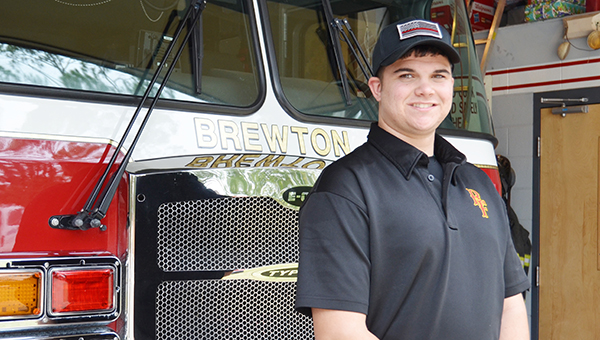 Lydia Grimes | The Brewton Standard
Alex O’Keane has been a firefighter with the Brewton Fire Department for just seven months.

A new face has shown up at the Brewton Fire Department on St. Nicholas Avenue.

Alex O’Keane has been a firefighter with the department just seven months, but he seems to have found what makes him happy.

He fits right in with the other firefighters and is one of the 15 full time (13 shift workers, the chief and the assistant chief). They work 24 hours on and 48 hours off. In his free time at the department he also helps out at the East Brewton Fire Department.

“I really like the people I am working with,” O’Keane said. “Everyone is a part of a tight knit group.

“I was born in St. Louis, Mo., but my step-dad was in the military and we moved around a lot,” he added. “When he finished with his time in the military, we moved to Brewton (the Damascus community). My mother, Misty Stone, was from Damascus, and my grandparents are Mack and Elizabeth Stone.”

O’Keane said he fit right in when he got back to Escambia County. He graduated from W.S. Neal High School in 2015.

“I had found an interest in becoming a firefighter while I was in trade school,” he said. “I thought I might go into the military, but I was interested enough to go to fire college instead.”

He graduated after nine weeks of fire college in April and started working at the Brewton Fire Department in May.

“I made several friends at the school and I think we will probably be friends forever,” he said. “When you go through the fire school you learn to bond with the others in your class. The nine weeks of training in Tuscaloosa were very tough, stressful and physical.

“I was able to get on here at the station pretty quickly and everything has been working out great for me,” he added. “These are some good people that I work with and the job fits what I am. Our family has always been oriented toward service work and this is my way of helping people.”

He has a younger brother and a younger sister who are being home schooled. Not only does he have that family; but he will also soon have his own little family.  He and his wife, Jasmine Carter O’Keane, are expecting a baby in a few months. The couple was married on Dec. 17, 2016 and they are planning a honeymoon sometime in January.

“You don’t get rich as a firefighter, so we have been saving and hope to take some time later this month. I have been working some extra hours to be able to make it. Things have been good for me.”