Steele works to help others as EB firefighter 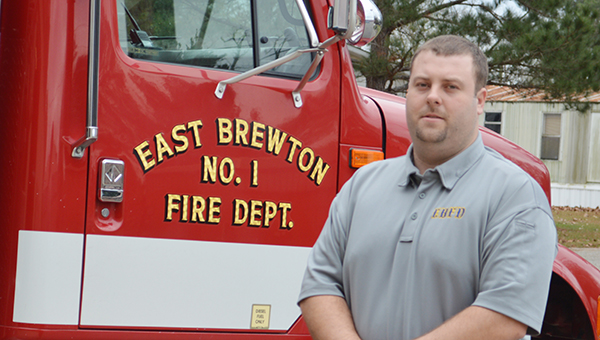 Although it isn’t general information, many of those who put their lives on the line in one city, work at both Brewton and East Brewton Fire Departments. Among those is Chris Steel of East Brewton.

“We have three regular firefighters here in East Brewton, but most of us also work at the Brewton Fire Department,” Steele said. “I work 24 hours in East Brewton, 24 in Brewton and then take off for the next 24 hours. It works out for most of us. We have time to relax at the station when there are no calls. Sometimes we are busy all day, but not always.”

Steele did not dream of becoming a firefighter as he was growing up.

He was born and raised on Foshee Road, attended Pollard-McCall Junior High School, and then graduated from Flomaton High School in 2005.

“l wanted to become a welder, and attended Jefferson Davis Community College in Atmore to earn a degree to that end,” he said.

But, as so often is the case, life happens and plans are changed all the time.

While attending JD, he got the opportunity for a scholarship to study drafting and design. With this scholarship he was able to earn another degree. It was at this time that his grandmother passed away and he found himself wanting to do something for someone else and spend time helping others.

“I began volunteering with the Escambia County Rescue Squad in 2008, and then, I volunteered with the McCall Volunteer Fire Deparment for about three years,” he said.

Then he made the decision to go through fire school at Ozark, then East Brewton.

Many of the firefighters in this area divide their time between Brewton and East Brewton, working 24 hours at one, 24 hours at the other and then off for 24 hours.

“Most of us have our hours split up like this,” he said. “I love the job, and over the years my passion has only grown. I think most of us feel the same way. We want to be able to help people.I don’t think any of us do our work for the glory.

Steele and his wife, Beverly, have a 2-year-old adopted son, Ryland, and currently reside in Barnett’s Crossroads.