Alex Luker, Jr. was the firstborn son of Reverends Alec and Annie Mae (Wasden) Luker, Sr.  He was born in Oak Grove, Fla., on Oct. 5, 1920.  Ninety-six years later, in the comfort of his home and surrounded by loved ones and close friends, his address was changed to Heaven on Jan.13, 2017. 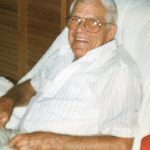 His nephew officiated at graveside, with an Army Honor Guard to play Taps and to present the U.S. flag to his widow.  Interment was in Oak Grove Cemetery, near his birthplace and where so many of his family members are buried.   Arrangements were handled with great care and dignity by Williams Memorial Chapel Funeral Home in Brewton.

Private First Class Luker served in the United States Army Alpha Company, 9th Infantry Regiment, 2nd Division. He fought in the European theatre In WWII, including the Battle of the Bulge, suffering frostbite and a back injury. He was honorably discharged on Feb. 8, 1946, allowing him to see his year-old son for the first time.

In 1957, he moved his family to Brewton to help start up the Container Corporation mill and worked there until his retirement on Oct. 10, 1982. The Lukers joined First Baptist Church of East Brewton in 1958.  Because of his dedication, he was ordained as a Deacon in the mid-1980s, serving faithfully until he was limited in recent years by declining health.  During retirement, he and Cozette were able to travel extensively with her sisters and a brother-in-law.  By 2010, the Lukers had visited every state in the United States and had enjoyed cruises to the Carribbean, the Panama Canal and Alaska.

He was a quiet and honorable man whose word and handshake was his bond.  He believed in the “Golden Rule”, and his life exemplified it. He loved his God, his family and his friends.  He also loved children, old western movies and music. He could burst out into “Old Dan Tucker” anytime, even up to the few weeks before he passed away. He will be lovingly remembered for his contagious smile, great sense of humor, and compassionate heart. In later years, when asked how he was doing, he always answered, “Doing pretty good for an old wore out man!”

He was preceded in death by his parents; brothers, W. J. Luker and Carlton Luker;  sisters, Jewel  Luker Jones and Gladyne Luker Graham; and a granddaughter, Devra Denise Merchant.

Her grandsons and nephews served as pallbearers.

She was born Oct. 23, 1927 to the late Deacon Richard and Eunice Poindexter of the Mason community. The family states “though we may weep for a while, we rejoice and thank our Heavenly Father for the life she lived among us and for taking her to the land of no more pain and suffering, the land promised to the faithful.”

She accepted Christ at an early age and joined First Marietta Missionary Baptist Church, where she served faithfully until her death. She was educated in the Escambia County School System and was employed for 22 years before retiring from the Escambia County Board of Education in 1998. She worked as a bus driver and a cafeteria worker touching the lives of many youth in the surrounding communities.

She was preceded in death by her parents, her husband, Hersol Benjamin; her children, Walter D. Poindexter and Zelma Culliver and a brother, Everette Poindexter.

He was born in Flomaton, and had been a resident of the Century community since 2016 coming from Pensacola.  During his working years, he worked for BE&K as a heavy equipment operator.

He was preceded in death by his parents, Buck and Louise Smith.

She was preceded in death by her grandparents , Edna Hill, Billy Armstrong, Margaret Mooney, Dorothy and Harold Hill and Sandra Bankston; and uncle, Paul Armstrong.

John S. “Jack” Neal, a native of Brewton and resident of Century, went to be with the Lord after an extended illness.

He was co-founder of Big River Cypress and Hardwood. He was a past president of the Brewton Chamber of Commerce, served as a Brewton city councilman, and was a former member of the Brewton Rotary Club.

He was instrumental in establishing the Brewton YMCA. He was a former member of the First Presbyterian Church in Brewton, and he was a current member of Century United Methodist Church. He was full of life, had a big heart and a contagious laugh. He pursued his beliefs and interests with unbridled passion.

Funeral services were held on Mon., Jan. 23, at 6 p.m. from the chapel of Craver’s Funeral Home with Pastor Joey Johnson officiating.

He was born in Pensacola, Fla., and had been a life-long resident of Flomaton. He was a member of the Northview High School Class of 1995, and worked as a laborer with Creamer Dozier.  He was of the Christian faith.

Graveside services, with military honors, were held on Tues., Jan. 24, at 1 p.m. at Pleasant Home Cemetery with the Rev. Tony Winkler officiating.

He was born in Brewton, and had been a resident of Colorado before returning to live in Brewton three years ago. He was a U.S. Army veteran; was a member of the NRA, and was a Special Olympics coach. He was of the Protestant faith.

He was a life-long resident of Brewton. He was a veteran of the U.S. Air Force, and was a technician at Monsanto for a number of years. He was a member of Hall’s Creek Baptist Church.

He was preceded in death by his parents, Johnny and Hattie Mae Morris; siblings, Richard, Frank, Edgar and Ida Mae; and two granddaughters, Melanie and Tina Marie Morris.

Graveside funeral services were held on Tues., Jan. 24, at 4 p.m. at Springhill Cemetery with the Rev. Doug Darby officiating. Her grandsons served as pallbearers.

She was born in Newburgh, N.Y. and had been a resident of Lenox since 1969, coming from Bay Minette. She worked as a teacher’s aide with the Conecuh County School System for a number of years. She was a member of Springhill United Methodist Church.

She was preceded in death by her husband of 62 years, Ernie Hanks.

Webb to compete on national stage