Gloria Mae Vaughn, 92, of Century, passed away peacefully surrounded by her children in her home on Sat., Jan. 28, 2017, after an extended illness.

Funeral services will be in Hernando at Brantley-Phillips Funeral Home, today, Feb. 1. Visitation will begin at 11 a.m. with the service at 1 p.m.

Graveside services will be at the Boggan/Vaughn Family Cemetery in Lewisburg, Miss. Officiating will be her pastor, the Rev. Eric Bryan of Century. 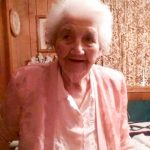 She was born in Tunica, Miss., on Aug. 4, 1924, to Lester Clinton and Vera Nix. She was a graduate of Horn Lake High School in Horn Lake, Miss.

She was a homemaker all her life, and was proud of her children and grandchildren. She resided in the Byrneville, Fla., area, where she was a member of Beulah Chapel Assembly of God Church.

She was a native and life long resident of Brewton. She was of the Holiness faith. She attended the W.S. Neal school system, She was a homemaker and loved gardening.

Lewis “Buddy” Lavon Bradley,76, of Wolf Log Road in Flomaton, passed away Fri., Jan. 27, 2017, in a local nursing facility after a brief illness.

He was a native and life long resident of Dixie. He attended Pleasant Home Baptist Church and the W.S. Neal school system. He was a former member of the Brooklyn Masonic Lodge.

He served as a Brewton police officer for 10 years, and was a retired truck driver from T.R. Miller Mill Company with 20 years of service.

He was preceded in death by his infant brother; two brothers, J.D. Bradley and W.D. Bradley; and two sisters, JoAnn Ballweber and Glenda “Nancy” Wooley.

Condolences may be sent and obituaries can be ead at williamsmemorialchapel.com.

Wanda Lee Jordan, 53, of County Road 73 of the Brooklyn Community Conecuh County, passed away Thurs., Jan. 26, 2017, at her residence after a brief illness.

She was a native and life long resident of Brewton. She was of the Baptist faith, a 1981 graduate of W.S. Neal High School, and a former employee of Sheltex and Brewton Fashions.

She is survived by her mother, Carolyn (Ron) Taylor of Brewton; brother, Curtis Jordan of Brewton; sister, Tara (Brian) Grantham of Brewton; three nieces; one nephew; and one great nephew.

She is preceded in death by her father, James Edward “Buddy” Jordan; husband, William Cobb; and son, Michah Jordan.

Condolences may be sent and obituaries can be read at williamsmemorialchapel.com.–

He was born in Bartow, Fla., and had been a resident of the Brewton area since 1968, coming from Jay, Fla.. He was a member of the T.R. Miller High School Class of 1972, and was a driver with AAA Cooper Transportation.

He was an avid Alabama fan; and was a member of the N.R.A.. He was of the Assembly of God faith.

He was preceded in death by his father, the Rev. Grady Sowell.

Funeral services were held at 2 p.m. on Sun., Jan. 29, from the chapel of Craver’s Funeral Home with the Rev. Wilbur Graves and the Rev. Jeff Harris officiating. Interment followed in Oak Grove Holiness Church Cemetery.

She was a native and life-long resident of Conecuh County, and retired as a machine operator at Judy Bond. She attended Oak Grove Holiness Church.

She was preceded in death by her husband, Graham Janes.

She is survived by four daughters, Catherine Stacey of Century, Fla., Janice Grissett of Castleberry, Wanda Carroll of Locust Fork, and Melissa Burgess of Brewton; two sisters, Myrtlene Trawick of Brewton, and Doris Odom of Jay; seven grandchildren; and 13 great-grandchildren.

Funeral services will be held at 1 p.m. today, Feb. 1, from the chapel of Craver’s Funeral Home with the Rev. Douglas Newton, and the Rev. Frank Scott officiating. Interment will follow at Springhill United Methodist Church Cemetery.

Visitation will be held at Craver’s Funeral Home today, from noon until service time at 1 p.m.

Honorary pallbearer will be Ray Patterson.

He was born in Lottie, and was raised in the vicinity of Monroeville. He graduated high school in Frisco City, and worked at Vanity Fair in Monroeville until joining the ministry in 1967. During his 50 years of faithful service, he preached the gospel of God in 21 different churches.

He was preceded in death by his parents, Don Carlos and Mary Ruth Dyal; and grandson, Noah Patterson.

There are no funeral services scheduled on her behalf.

She was a native and life long resident of Brewton. She attended the East Brewton Community of Christ Church and was a 1949 graduate of T.R. Miller High School. She was retired from D.W. McMillan Memorial Hospital with 25 years of service, and was a homemaker.