Ever wonder how Appleton got its name? 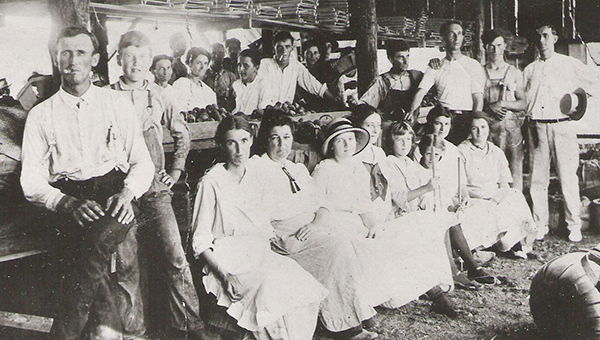 Courtesy photo
Fruit packing sheds, like this one at Canoe, AL, would have been common in Appleton during the peak of the Shell Apple season.

BY KEVIN MCKINNLEY/ ALL THINGS SOUTHERN

Following the War Between the States, or as some people call it, the American Civil War, many veterans settled in our area determined to start a new life.

In our local area, one Confederate veteran helped found the community of Appleton and managed to have an apple named for himself.

Mr. Green Shell had enlisted in Company D, 16th Alabama Infantry Regiment in July 1861. He was wounded at Murphreesboro, Tenn. Later, he was injured again on Dec. 2, 1864, when a troop train he was travelling in wrecked between Atlanta and Macon. Shell had both legs and one arm broken.

Later in life, Shell received a Confederate pension from the state of Alabama. Mr. J.E. McGowan and Alex McGowan Sr. witnessed the application and attested to his service in the war.

According to a Brewton Standard article from Thurs., Nov. 28, 1974, Appleton had its roots in apple orchards and in the vision of Green Shell.

By 1880, Green Shell, originally from Dasen, in Randolph County, Ga., had recovered from his war wounds and moved to the area near what is now Appleton. A tiny post office was located in the corner of the intersection of Wallace and Belleville Roads. Edmund Steele, also a Confederate veteran, was the first postmaster. Steele could be seen on Tuesday and Friday of each week, rain or shine, with his horse and buggy, working the mail route. Steele enjoyed the fact that, at one point in time, he was the oldest mail rider in the US.

Shell gave the town the name of his father’s apple orchard, which he remembered from being a child in Georgia.

He soon set up a remarkable agricultural enterprise in the community. According to Anne Waters’ book, The History of Escambia County, the business had a large grading shed, complete with shipping barrels and a cider press. In the harvest season, Shell’s son, Andrew, made two trips a day by wagon to deliver the apples to the freight office at Brewton.

The apples being shipped north were known as “Shell apples.” The culls were used for making jelly or were made into cider and sold. Shell also grew young trees, which sold readily and in a few years nearly every farm had several of the trees for family use. The Shell apple tree can still be purchased today.

By 1912 or 1913, rural mail delivery had been expanded from other places so the little post office closed. John O’Bannon from Brewton moved to the area and bought the Roberson house and their business. One of the first things O’Bannon did was to dig a storm pit. Everyone in the community laughed at the new comer for his seemingly awkward ideas on the subject, much as an earlier generation laughed at a man named Noah for building an ark on dry land.

In February 1916, O’Bannon was sitting in his store reading the newspaper and watching his barometer, which hung on the wall. Suddenly, the barometer fell, indicating a tornado was near. O’Bannon rushed outside to find the darkening clouds and harsh winds swirling about his yard. O’Bannon managed to gather as many people as he could and they all rushed into the storm pit which was by now completed and improved.

Just as the last person entered the pit, and the door pulled closed, the tornado struck. The roar was deafening as the storm pelted the area. After the storm, the survivors emerged to find every house, except for three badly damaged structures, was completely gone.

A man traveling through the area with a load of raw turpentine saw the tornado coming, loosed his mules and lay on the ground and held onto a persimmon bush for protection. He was left with shredded, torn clothes but at least he was alive. The mules were found a mile or so away, alive and well. An elderly lady named Melissa Griffin died in the storm. Many people in Appleton owed their lives to the storm pit of John O’Bannon.

Green Shell died in 1930, a man of vision and a reminder of an earlier age when honor and hard work meant something. Edmund Steele, the postmaster and Confederate veteran, died in 1906.

A special thanks to James Summerlin for providing some of the material for this article.

Contact Kevin McKinley at 251.294.0293 or mckinley2971@gmail.com if you have an interesting local history story for publication.