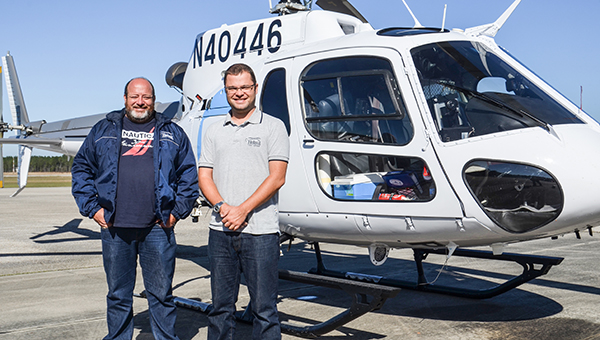 With fellow flight mechanic Sergio Nascimento the two-men crew were ready to continue their 50-hour helicopter flight from Louisiana to Curitiba, Brazil. What wasn’t expected was a stop in Brewton, Ala.

“To fly, the helicopter has to be operating at a 100 percent,” Maranhao said. “Before landing here we were at around 95 percent. After we landed, Sergio worked to repair a leakage due to a faulty hose in the helicopter. On our way we called in to (Brewton Municipal Airport) to make a landing. We are thankful for the generosity here. We really felt welcomed.”

“We knew they had repairs to make, and we were glad to have them stop here,” Moye said. “They have a long trip ahead of them, and to make a stop in Brewton for flight resources or general maintenance are some of the primary functions of our airport.”

Maranhao and Nascimento work for Helisul, a Brazilian flying company.

The trip in progress was to transport an AStar television helicopter that was customized in Louisiana back to Curitiba to be put to use for endeavors like aerial shots or news reporting.

After leaving Brewton the next stop was Tallahassee for the crew, afterwards the trip continued at a pace of three-hour stop intervals before touching down at home.

“The best stops are in the Caribbean,” Maranhao said. “We still have some travelling to go. We want to thank the Brewton Municipal Airport for their hospitality, and the city and mayor for keeping the airport open for us to make an emergency landing.”