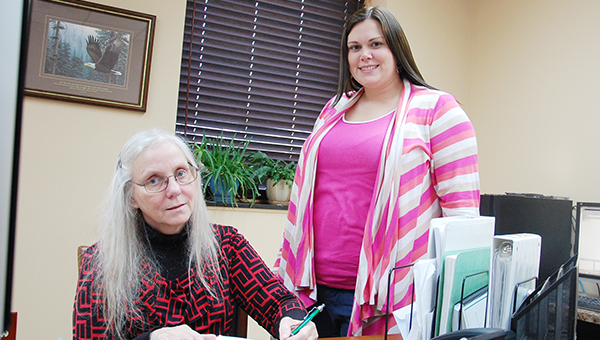 Lydia Grimes | The Brewton sStandard
Karen Singleton and Christy Edwards, who will take over as East Brewton City Clerk.

A familiar face will soon be missing from East Brewton City Hall. Karen Singleton will be retiring after a long career; first as assistant clerk and then as city clerk. She has worked in this one office for the past 42 years and it won’t be the same without her. She has held her position long enough to see four different mayors serve, Malcolm “Tut” Edwards, Lovelace Parker, Bernie Raines and Terry Clark. They all knew what a value she was to the city and many people say that she knows more about East Brewton than anyone else.

Her jobs vary but most of what she does has to do with finances for the city and be a “leg man” for the mayor. She probably knows more than anyone about how much money East Brewton has spent over the past 42 years.

She was born and raised in East Brewton, and attended the W.S. Neal School Schools in East Brewton. She and her husband, Billy Ray Singleton live just down the street from the house she grew up in. They lived for a number of years in Sellersville, but decided to move closer to their work some years ago.

“I was no stranger to the workings of East Brewton,” Singleton said. “My father, Henry Harold Jr., was on the city counsel for seven years.”

She graduated from W.S. Neal High School in 1970 and enrolled at Jefferson Davis Community College in Brewton. She graduated in 1972 with an associate’s degree in art.

“I have always loved history and I started to college wanting to be a history teacher,” she said. “I got my bubble burst about that when one of my teachers told me it would be hard to find a job. So I thought I should major in something else. I still love history and have done some genealogy on my family, but I do it because I love it so much. I have written some journals and given them to my family members. They probably won’t appreciate them until they are older, but I decided to go ahead and do it now.”

Singleton is a walking history book about the people of East Brewton and Fort Crawford. Most probably, she knows almost everyone who lives in the area.

The teacher who told her not to teach history directed her to change her future. She switched courses and received her degree in art.

“Thinking back on it, I should have studied accounting because that is really what I have done all these year,” she said.

After several odd jobs around town, she heard that Amanda Roberson was leaving her position at city hall on a maternity leave, and wouldn’t be coming back. She quickly took advantage of that knowledge and went to work as assistant city clerk during the administration of Malcolm “Tut” Edwards.

“I enjoy what I do,” she said. “There aren’t many of us working in the office and we have become like a little family.”

She began planning her retirement several years ago and in preparation for that time, they brought in a new worker, Christy Edwards, to train in her place. The transition should be very easy when the change comes.

“She has been in training and I mostly just supervised,” Singleton said. “I will be available for any help they think I could give them.”

She has plans for her retirement. Her husband is the pastor of a small church in downtown Brewton, House of Prayer, and she said she wanted to be able to do more work there. They have four children and five grandchildren, so of course they plan on spending lots of time with them.

“I’m just a country girl at heart,” she said. “I have lived in town and way out in the country, but it’s easier to be closer to our church and our work.”

Singleton said she and her husband were part of the group that was worried about Y2K and what might happen. They installed a pump so that they would have water. They bought a wood stove for heating and cooking and put in a root cellar.

“Thank goodness we never needed those things, but they have still come in handy through the years,” she said.