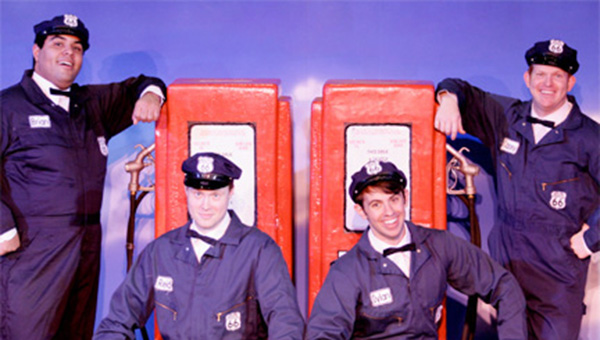 Courtesy photo
Route 66, which is on a 10-week tour of 27 states, will take the stage in Brewton.

BCA member Clay Lisenby said, “Audiences are sure to be entertained by the hit musical comedy revue, “Route 66” being performed by the national touring company, Springer Theatricals.”

The show, which is on a 10-week tour of 27 states, will take the stage in Brewton on the Woodfin Patterson Auditorium state of Coastal Alabama Community College at 7 p.m. next Thursday.

“In Route 66, this show follows a gang of rowdy Chicago service station attendants as they strip off their snappy Texaco uniforms and head off on a westward-bound road-trip filled with music, dance and highway mischief,” Lisenby said. “It features rock and pop music from the 1950s and ‘60s.”

The show’s author, Roger Bean, first created “Route 66” for the Milwaukee Repertory Theatre and then developed it further at the famous Oregon Cabaret Theatre. Bean has now turned the production over to the 145 year-old Springer Theatre, which is Georgia’s official State Theatre.

Tickets for the show are $15 for adults and $8 for students. CACC students and staff are admitted free of charge. Tickets will be available at the door.