She’s 91 and blessed beyond measure 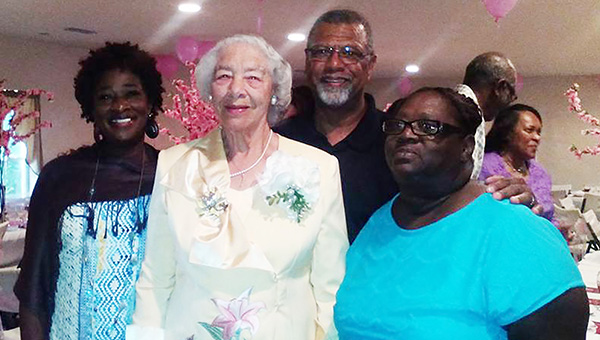 Courtesy photo
Florence Rowser will turn 91 years old on May 16, at her last birthday party.

Florence Rowser will turn 91 years old on May 16, but she is still going, although she now travels a bit slower.

“I have been truly blessed,” Rowser said. “I have slowed down a little bit, but I plan to continue serving my community just as long as I am able and I am needed.”

That is her attitude about most things. She is soft spoken and always has a smile on her face. She is, in truth, a lady in every sense of the word.

Her list of accomplishments are too long to mention all of them, but some have changed the lives of others.

She was recognized by the City of Brewton and Mayor Yank Lovelace last year on the occasion of her 90th birthday. In part her proclamation stated some of her many community works as including volunteerism as coordinator of Candy Stripers at the hospital and nursing home, local leader of 4H Club, member of the Gamma Theta Chapter of the National Sorority of Phi Delta Kappa, Inc., member of the Brewton Council of the Arts, Order of the Eastern Star, Sunday School teacher and superintendent at Bergen Community Church and as an active member of Pine Grove Baptist Church.

She has been recognized for her work in Volunteers of America, her association with Father Flanigan’s Boys Town, Easter Seals, Disabled Veterans and the Brewton Board for the Homeless in Escambia County. The dearest to her heart is her work with the Rottschafer Day Care program.

This is a program that was founded in 1967 by Mary Ann McMillan, who believed that there was a need for good care and learning of preschoolers whose mothers worked. She continued with the program until 1972 when she felt she was needed at her own home and turned the teaching at the school over to volunteers.

This arrangement continued until Southern Normal School was sold in the early 1990s. Until then, the school had supported the preschool, but now volunteers had to raise funds and survive on their own.

Mrs. Marjorie Rottschafer was with the Reformed Church. After the death of her husband, she volunteered, with not only her time, but also with the finances of the school. The school was named in her honor.

In the early 1990s, Mrs. Rowser, who had taught home economics and social studies for many years took on a more active role with the school, helping to raise funds and serve on several boards which she has continued to do.

“I came to Brewton in 1965, but I didn’t come willingly,” she said. “I was just fine living in Daphne, but my husband was hired to teach at Southern Normal, so I had to come with him.”

She later was hired at the school also and found herself a part of the community here. She continues to offer her help at Rottschafer but has had to curtail many of her activities.

“I am feeling my age a little bit,” she said. “The other day I went down and watered the grass at the day care and it took a lot out of me. I don’t drive much any more, but I have friends who take me where I need to go.”

Although she has lost both her husband and her only child, she continues to smile and brighten the lives of others.

“God is with me, so why should I worry?”

That attitude has brought her through the past 90 years and hopefully she will continue to serve her community.