He was cremated at his request. Interment was at Oak Hill Cemetery in Atmore. 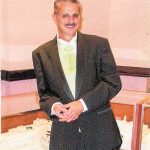 Family that preceded him to Glory were his parents, John P. “JP” Madison and Bennie “Cooter” Madison; brother, Sonny; and two sisters, Net and Beth.

He is survived by a brother, Kyle.

His life on this earth brought much love and peace to those who knew him. He served at the Zales Jewelry Company for 30 years and sold thousands of diamond wedding rings to those happy in love couples. He also found love for more than 40 years and was legally married on Sun., Sept, 20, 2015, at noon by their friend, Mayor Jimmy Weekley of Key West, Fla. He is survived by his spouse of four decades, Russell L. Marx.

“Travel in peace my dearest Prince, my heart is broken. I will always only love you.” – Russell.

Visitation will be held Thurs., March 23, from 10 a.m. until 11 a.m. at Williams Memorial Chapel Funeral Home.

He was a native and life long resident of Brewton. He was a member of the Sheperds Chapel. He enjoyed making music, was an avid fox hunter and loved his dog, White Shoes. He was a retired logger from Robert Pugh Logging.

Wilma V. Fuqua Lambert, 91, of Dogwood Lane in Brewton, passed away Tues., March 14, in a Jay, Fla., medical facility after a brief illness.

She was a native of the Dixie Community, and a life long resident of Brewton. She was of member of the East Brewton First United Methodist Church.

She was a retired secretary from the Escambia County Alabama School System and was a homemaker who enjoyed cooking and canning.

He was preceded in death by his parents, Charlie Gillman and Willestine Glover.

He was a native of Lumberton, Miss., a former resident of Brandon, Miss., St. Francisville, La., Opp, and a long time resident of Brewton. He attended Louisiana College and graduated from the Southern Baptist Center for Biblical Studies. He was a U.S. Marine, the former preacher at Catawba Springs Baptist Church for 19 Years and was a Southern Baptist preacher for 46 years.

He is preceded in death by grandchildren, Clay Bounds and Lindsay Brackin.

She was a native of Montgomery, a former resident of Andalusia, and a long time resident of East Brewton. She was a member of the East Brewton Church of God where she served as ladies auxiliary secretary, director of church daycare, and was a homemaker.

Another angel was called home. Betty Sue Merchant passed away on March 17, 2017 at her home.

She fed the world working in the food industry all her life including being former owner of East Side Cafe of East Brewton. She was a wonderful and loving sister, mother, grandmother and aunt.