It’s like coming home after a long absence for the new pastor of First Baptist Church of Brewton.

“I am from Enterprise, but my wife is originally from Brewton,” said Cavin Cawthon. “We had moved so much,that we decided that we didn’t want to move anymore, and if we did move, it would be to Brewton. We never guessed it would happen that way.”

Cawthon’s wife, Charlotte, is the daughter of June Martin and the late Bob Martin of Keego.

Cawthon was born and raised in Enterprise. He graduated from Enterprise High School in 1988 and joined the U.S. Air Force, serving in Operation Desert Storm. 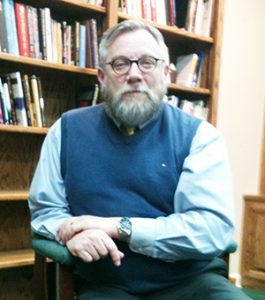 “It was while I was in the military that God began to weigh on my heart for me to go into the ministry,” he said. “Then, about the time I left the military, I realized that preaching and ministering to others was what I wanted to do.”

He entered Baptist College of Florida at Graceville, Fla., earning a bachelor of arts degree in theology in 1996. His first pastorate was in Tallassee at Elam Baptist Church where he pastored for two years.

He continued his education at New Orleans Theological Seminary and earned a master’s of divinity degree in 2000. He got the opportunity to return to Enterprise to pastor at Mount Pleasant Baptist Church. from 1999-2002 and then from 2002-2007 at Olive Spring Baptist Church in Marietta, Ga. He returned to Enterprise one more time in 2007 and organized a new church, Church on the Circle.

“It had been weighing on my heart for some time to enter the mission field,” he said.

“I spent several years in Costa Rico working with the International Mission Board of Southern Baptist Convention.”

He was a church plant strategist in Bogata, Columbia, and in Panama City, Panama. During this time, he organized around 140 churches and ministered to millions.

He was not alone during these years. While he was still in Enterprise, his mother, who worked in the county extension office, invited him to go to church with her.

That is where he met Charlotte Martin, who worked with his mother. They were married in 1991, and they now have three children, John Robert, who works at Sun Trust Bank in Atlanta; Christian, who will be a junior at Auburn University in the fall, and Preston, who is in the ninth grade at T.R. Miller High School. The family is temporarily living in the Weaver old home place on St. Nicholas Ave.

“The whole family came back to the United States speaking, not only English, but Spanish, too,” he said.

With the family living in Central America countries, that helped all of them.

“After we had been there for so long, we felt as if we should bring the children back to the United States to go to school,” he said. “So in 2014, the family came back to the states.We settled in at Lilburn, Ga. and were not thinking of moving again, but how could we not? We were approached by the church committee from Brewton when they found out we might be interested in coming to Brewton.

“This had been a dream of ours for a long time and everything has worked out just right,” he added. “I think we will be around a long time.”

“I like to eat, and I love fried chicken, so I am sure we will be very happy here,” he said. “We also like to watch Auburn football, and I am sure we are going to enjoy football very much at T.R. Miller.”