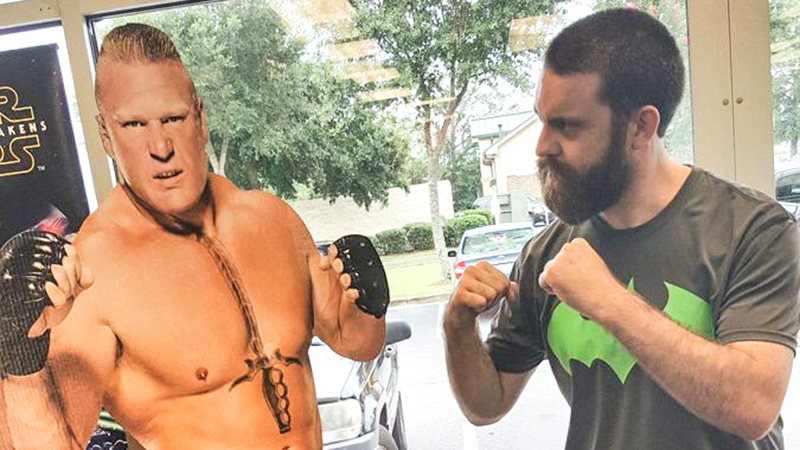 The World Wrestling Entertainment universe will converge on Orlando, Fla., on Sun., April 2. In attendance will be Brewton native Caleb Smith.

One will find it difficult to find a bigger fan of wrestling entertainment than Smith. The wrestling gods reigned supreme this past summer awarding Smith two tickets to the wrestling event along with airfare, hotel and spending money.

Smith, who has loved wrestling for years, said he has attended a few live wrestling events but never to WrestleMania.

“I feel extremely lucky for winning the sweepstakes,” Smith said. “I’m super stoked and beyond ready to attend. It’s a big deal and a once in a lifetime opportunity.”

How Smith came to win the sweepstakes may seem like something written for a movie.

“I went to Gamestop at Creighton Road Store in Pensacola, Fla., to preorder a game on my birthday,” Smith said. “I been to the store a few times but that isn’t my go to Gamestop. I just happen to go to that store that day. While there, I saw the Brock Lesnar standee. On the way out the store I asked a worker there could I take a picture with it.” 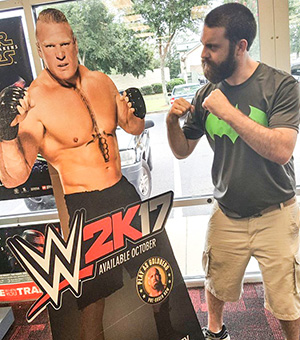 Courtesy photo
Caleb Smith poses with the Brock Lesnar standee at Gamestop in Pensacola, Fla. The picture was chose as the winner of WWE 2K17 2games sweepstakes.

Posing with clinched fists and a full out beard, Smith’s girlfriend at the time took the picture of him and the Lesnar standee together.

“Later, I got online and made sure I followed the directions to enter on Twitter,” Smith said. “I sent it in and didn’t hear anything for several days. I looked at other entries on the website out of curiosity to see what others had done. They were getting responses and I wasn’t. I thought I did it wrong.”

On Aug. 3, about six days after the contest ended and the winner was to be announced, Smith said he received news from 2kgames that he was the prospective winner.

“I messaged them back immediately,” he said.

“I was lucky. I know it had to be several hundred, to a few thousand people who entered. Somehow or the other I got picked.”

For a month Smith had to carry the secret he won the sweepstakes.

“I knew I won but couldn’t let the public know I won until September as paperwork was getting done,” Smith said. “I’m not one to boast, but keeping a secret like winning a trip to WrestleMania from everyone was frustrating.”

WrestleMania is known for its star studded matchups and surprise appearances of celebrities and iconic wrestlers of the past. Smith said his favorite wrestlers to watch growing up were Booker T., Rey Mysterio and Goldberg.

Today he said some of his favorites to watch are Seth Rollins, AJ Styles, Bray Wyatt and Roman Reigns. He said he can’t wait to see them and the other WWE superstars in action live.

“Wyatt played football at Troy University where I attended undergrad,” Smith said. “Roman Reigns is out of Pensacola, Fla., which is close to home. He gets a lot of hate from the crowd but I respect him.

“Others I like to watch are Dolph Ziggler, Brock Lesnar and Randy Orton. The Rock has always been one of the funniest and most entertaining characters in the WWE, so I am hoping he will make an appearance so I can see him live.”

Smith said he’ll be taking his best friend, Mixon Till, to Wrestlemania.

“Mixon and I have known each other for a few years and he is one of the kindest, most loving, Christian guys you will ever meet,” Smith said. “He is amazing and comes from one of the best families that I have ever met. He appreciates wrestling just like I do, so it was a no-brainer to choose him.”

Crowd posters are strong in the culture of entertainment wrestling, with some of the best catching air time and glimpses from audiences tuning in. Smith said he and Till are still working on ideas. “We plan on doing something, Smith said.

“Time is running out, but I think we’ll come up with something clever in time.”

WrestleMania 33 will begin at 6 p.m. central time and can be ordered on paperview or viewed by subscribers on the WWE Network app.