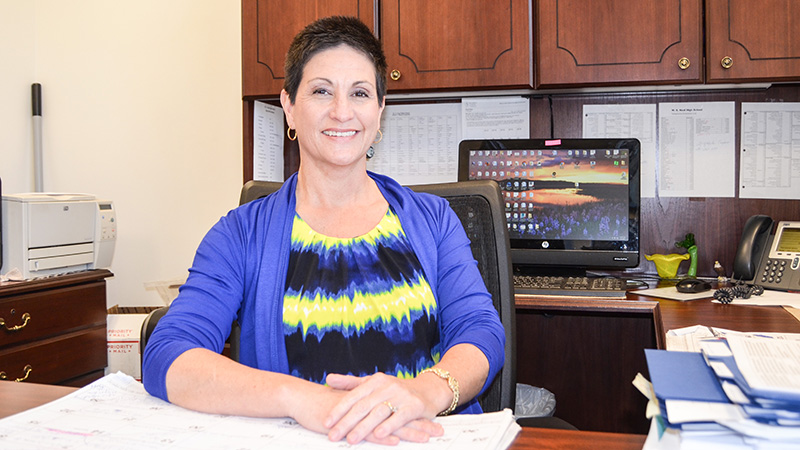 Patty Frazier doesn’t look as if she could lay down the law and enforce it, but looks can be deceiving.

Frazier spent most of her career in the Escambia County School system, first as a teacher, then an assistant principal and then finally as principal in 2009, after the death of Phillip Ellis.

“There aren’t many high school principals who are women, but there are some of us,” she said.

She seems to have a special connection to her students. A walk down the hall of the new high school finds her speaking to one student after another and she always calls them by name. Running in the hall can be stopped with just one word. It is clear that she is highly respected in her position.

She followed in the steps of Ellis, a principal who was loved by the teachers and students alike, but she is making her own mark on the school.

“Sometimes it is a two edged sword working in the place you grew up. Some think it will make it easier, but sometimes it is harder. I love all of our students and I think we have a good working relationship.”

Frazier was born in Chicago, the daughter of a military man, and later construction worker, who was from this area. They made the move back to South Alabama when she was in the third grade. She attended Pollard-McCall Junior High. She graduated from W.S. Neal High School in 1985 with honors while at the same time attending some classes at Jefferson Davis Community College.

“That was before the school system had dual enrollment for students, but that is what I was really doing,” she said. “I then transferred to Auburn University in 1986 and graduated with a bachelor’s degree in special education.”

She also met her future husband, Tony Frazier, at church in East Brewton. They were married in 1988 following college graduation.

“We moved to Cullman and I worked at Lureen B. Wallace Developmental Center in Decatur, and Tony took a veterinary position at East Point Veterinary Clinic,” she said. “I then went to work with Cullman County Schools.”

In 1990, they moved back to this area and she was hired to teach in the Escambia County School System and Tony opened his own veterinary practice. She became the special education teacher for W.S. Neal in 1990 and went back to school at Auburn University to earn her master’s degree in 1992.

In the meantime Tony moved from his own practice to becoming the veterinary medical officer in the southern part of Alabama and was elected as the State Veterinarian of Alabama.

Frazier received her certification in school administration in 2006 and became the assistant principal of W.S. Neal High School where she continued until then-Principal Phillip Ellis passed away.

The Frazier family lives near I-65 on Appleton Road and commute to their respective jobs, with him working in Montgomery and her at W.S. Neal.

They live in a “barn” where the horse stalls are on one side and living quarters on the other.

“The family joke is that our three kids can say, ‘Yes, we were raised in a barn.’

“We love it there,” she said. “There is an open area between the living quarters and the stalls. Our family is big on animals so we always have some around somewhere.”

The Fraziers have three children: Nathan, 26, who works as a microbiologist in the state diagnostic lab in Auburn; Madeline, 20, who is a junior at Auburn University studying poultry science; and Samuel, 19, who is in his first year at Opelika Southern Union College in the Bridge Program with Auburn University and he plans on studying agronomy (study of soils). All three of them live together in Auburn.

“Since all the kids are out of the house, you would think I had plenty of time, but I don’t,” she said. “I am still just as busy as I was when they lived at home.

“I love what I am doing and as long as I do, I will be right here with my other family,” she said.