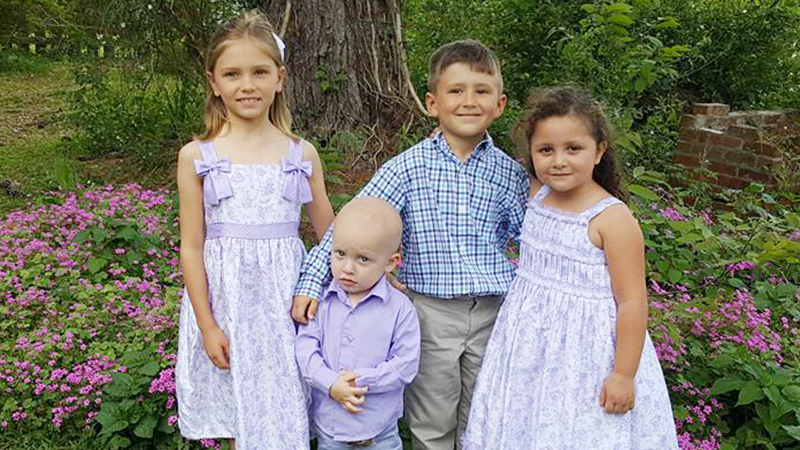 Courtesy photo The Marion children - Kirra, William, Zack and Koltyn – dressed in their Easter finest. William was diagnosed in February with rhabdomyosarcoma, a soft tissue cancer. A benefit is set for April 29 to help the family with expenses.

A benefit ride is set for Sat., April 29, for a Brewton toddler battling a rare cancer.

William Marion, the son of Jessica and Christopher Marion, woke up screaming in February. A trip to the emergency room and later an abdominal ultrasound revealed a parent’s worst nightmare – cancer.

“They found a tumor and sent us immediately to (the University of South Alabama hospital) in Mobile,” mom Jessica said.

The diagnosis – rhabdomyosarcoma, a soft tissue cancer made rare due to the location of the tumor. Doctors were unsuccessful in removing all of the tumor, and now, the boy must undergo chemotherapy.

“Ever since then, William has had to undergo chemo every week,” she said. “They’re also talking about surgery to remove the tumor, which is located between his internal organs, depending on if it decreases in size.

“He is in constant pain because the mass is pressing against his nerves,” Marion said. “How do you explain something like this to a baby? You don’t. You say, ‘You are very, very sick.’ He tries to understand the best way he can.

“We have been dealt an unfortunate hand but we are trying to stay strong for William,” she said.

William’s tumor was pressing up against his nerve, making it hard for him to move his legs. Now, he’s catching up and making for lost time.

“His legs are weak, but he’s not letting that hold him down. He is back to his normal self,” she said. “He’s doing all the things little boys are supposed to do – some of which nearly give me a heart attack.”

To help meet expense, a GoFundMe page “Willpower for William” has been established. A 100-mile “through the back roads” benefit motorcycle ride will be held on Sat., April 29, in Jennings Park. Organized by Sherri Weaver and Jane Johnson, registration will be at 9:30 a.m. and departure at 10:30 a.m. Cost is $20 per bike and $10 for each additional rider. Lunch is included. Those not wishing to ride can donate at a number of events that day including a cakewalk, silent auction, raffle and more. Children’s events will also be held, as well as live entertainment.

“Throughout this whole thing, our community has been wonderful,” Marion said. “Our appreciation can’t be expressed deeply enough. Thank you all for your prayers and love.”