Visitation will be held today, Wed., April 26 at 1 p.m. at First Baptist Church of Brewton with funeral services at 3 p.m. Bro. John Finklea will be officiating. Interment will follow at Union Cemetery in Frisco City with Williams Memorial Chapel Funeral Home directing. 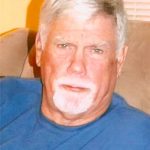 He was a native of Frisco City and a life-long resident of Brewton. He was a graduate of Frisco City High School and Troy University, where he attended on a basketball scholarship. He earned his master’s degree from Livingston University.

He had a long career in education and was beloved by many as a coach, teacher and principal. His educational career included Enterprise, Elba, T.R. Miller, Evergreen, W.S. Neal, Atmore, McCall and Flomaton High Schools.

He was a member of First Baptist Church of Brewton. He enjoyed spending time with his family, as well as bird hunting with his dogs.

He is preceded in death by his parents, Guy Hartwell Sawyer and Willie Earl Sawyer of Frisco City.

Flowers will be accepted or donations can be made to Quail Forever, The Habitat Organization.

Funeral services were held Sat., April 22, at 11 a.m. from the chapel of Craver’s Funeral Home with the Rev. Ronald Hall officiating. Interment followed in Cooper Cemetery.

She was a life-long resident of Conecuh County. She was a homemaker and was a member of Appleton Free Will Baptist Church.

She was preceded in death by her husband of 47 years, Mack Cooper; and a great-grandson, Billy Ray Hobbs Jr.

He accepted Christ at an early age and had been a lifelong member of Old Spring Hill Primitive Baptist Church where he was affectionately know as “The Gatekeeper.” He was a graduate of Southern Normal High School. He was a hard worker who spent the majority of his younger years working in the manufacturing industry until his retirement due to health.

He was preceded in death by his brother, James Burns.

He was preceded in death by his father, Carl Bryant Etheridge.

James Mertis Davis, 83, of Jay Road in Brewton, passed away Tues. April 18, 2017, in a Bay Minette nursing facility after a brief illness.

He was a native and life long resident of Brewton. He was member of the East Brewton First Assembly of God Church, a 1952 graduate of W.S. Neal High School,  U.S. Army veteran, and was retired from Smurfit Stone with 34 years of service. He enjoyed fishing and traveling.

He is preceded in death by parents, Mertis and Lola Carter Davis.

Hiliary Johnson was born Feb. 24, 1933, to the late Anderson Johnson Sr. and Janie Benjamin Johnson in the Johnsonville Community of Conecuh County.

After a brief illness and spending some time in Mobile’s health facilities, he was brought back home to enjoy the peacefulness of his own house. He gracefully exited this life for his eternal life Sat., April 8, 2017, at D.W. McMillan Hospital.

He is preceded in death by his parents, four brothers and three sisters.

In his earlier years, he attended school in Conecuh County. When his family moved to Brewton, he attended school at Southern Normal. Back in his days, more value was put on farming and making sure the family had food on the table so he didn’t finish school, but he knew the value of an education and would encourage the younger members of the family to get an education. He would often say, “If I had the educational opportunities that the children have today, I don’t know where I might be.”

When he was a child, he was known by his brothers as the one that would tear up his and their toys if they let him tinker with theirs. He wanted to know how it worked. As an adult, this made him become quite the handy man.

He learned commitment to the needs of the family and farming skills from his father. He was extremely reliable and dependable, which were qualities that helped him succeed in the careers he worked in.

He had been employed by T.R. Miller Lumber Mill. In the 1960s, he and his young family moved to California where he would eventually learn the construction trade of hanging and taping sheetrock.

He returned to Brewton in 1989 and started working in the construction business with his brother, John. When there was not enough work in the Brewton area they found plenty of work in the Atlanta, Ga.

He did this for about three years before turning his attention to his true passion and worked for his brother Anderson undertaking a favorable cattle business.

He was very generous whether it was with his time, home, advice, wisdom, effort, tangible property and/or money. These are traits he learned from his mother. He believed that love was a labor of service; and to those who were fortunate enough to cross his path, they found help indeed. If he planted a garden, he shared the fruit of his labors with as many people as he knew. If he saw that you were sincere and trying your best, he would do what he could to be of help to you. He wanted to be treated right, with dignity and respect and he gave out the same.

He devoted his life to the welfare and care of his family both in life and after his death. He was a fighter and he had a strong will and strong opinions. He would often say, “People would be surprised about how many people will make it from the bed to paradise, just like the thief did on the cross.” He was a lover of people and he was passionate about politics. He kept his eyes on the political arena and would give you his opinions about such when the opportunity presented itself.

He met and eventually married the love of his life, Ruby Delores Knight, on October 18, 1958, in Beaumont, Texas. He fell in love with Ruby, according to him, because she was caring and kind to all that she met. To this union, they were blessed with six children.

Visitation will be held Fri.,  April 28, from 2 to 3 p.m. at Williams Memorial Chapel Funeral Home.

She was a native of Sellersville, Fla., and a long time resident of Brewton. She attended Munson High School, got her RN degree from South Alabama, and was a retired RN and Nursing Administrator of University Hospital in Pensacola, Fla., and Baptist Hospital in Atmore with more than 30 years of service.

Charles William Lee, 80 of Woodmont Drive in Brewton, passed away Thurs., April 20, 2017, in a local hospital after a brief illness.

He was a native of Repton, and a long time resident of Brewton. He was a member of the Spring Hill Methodist Church, a graduate of Repton High School, a U.S. Army veteran, and a retired lead lineman from Alabama Power Company with 43 years of service. He enjoyed farming, fishing and hunting.

He is survived by his wife, Beth Purnell Lee of Brewton; son, Jeffery Lee of Pensacola, Fla.; three brothers, Johnny Lee of Greenville, James Lee of Repton, and George Lee of Navarre, Fla.; two sisters, Venaro Kendrick of Panama City, and Sara Plunkett of Arab.He is preceded in death by parents, George and Mazie Bradford Lee; and brother, Lowell Lee.