McDowell heads back to work as clerk 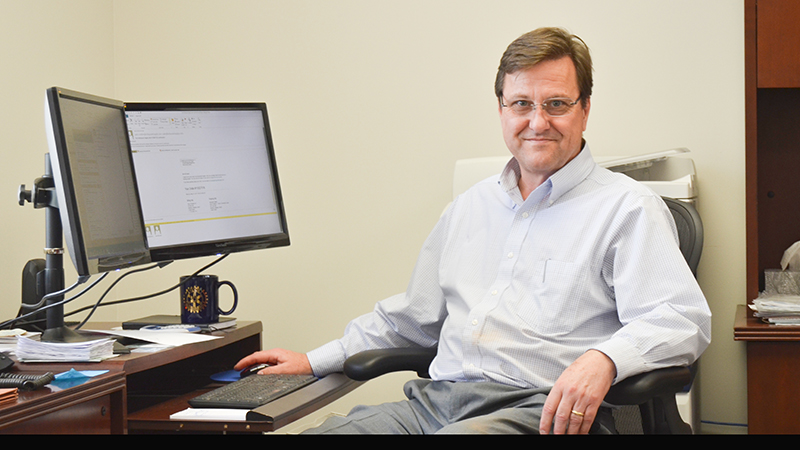 Lydia Grimes | The Brewton Standard Alex McDowell, who is the new city clerk/treasurer.

Alex McDowell has changed his mind about retirement and is now back in the work force, with a new position with the City of Brewton.

McDowell replaced Steve Yuhaus as the city clerk/treasurer and now spends his time behind a desk once again.

“It has really been a healthy thing for me to do,” he said. “My wife passed away last year and the job keeps me busy. We were married in 1978, but we knew each other back in high school so you could say that we lived our whole lives together. It does me good to have something to take my mind off things.”

McDowell wears a lot of hats in his new position. He is the record keeper. historian, parliamentarian, legal draftsman, financial manager, election manager, water board member, personnel and compliance officer for the city of Brewton. As the city historian, he is responsible for keeping up with the records kept in city hall. He has copies of council meetings as far back as the 20s. Although most things are now done digitally they still keep hard copies of several things.

This is not a job that McDowell would ever have thought he would have. He said even after he finished college he had no idea of what he wanted to do to provide himself with a living. He chuckles when he tells about following in the footsteps of his father and his grandfather.

“I think about it sometimes and I realize that my job is very similar to what they did for a living and that is not what I wanted to do,” McDowell said.

He was born here in Escambia County in 1954, the son of James E. McDowell and Merle Pridgen McDowell. He graduated from T.R. Miller High School in 1973 and said he was an average student.

“To tell the truth, I spent very little time in the classroom,” he said. “I attended the vocational school and spent a lot of time working at T.R. Miller Mill.

“I got a job laying cable for AT&T and went to Auburn University in the fall,” he added. “I still didn’t know what I wanted to do, but I graduated with a major in English and minors in journalism and physiology.”

He came home and married Jane Heffernan in 1978. He got a job with the Brewton City School System for about two years. They then both went to the University of Alabama where he got a degree in education. When they returned to Brewton, both of them went to work for the city school system.

This was still not the only position he held. He had also worked for 17 years at United Bank in Atmore.

He and his wife had three children, Robert, Kate, and Marshall. Now the family has grown to include six grandchildren and one on the way. Four of those grandchildren came all at the same time when they arrived as quadruplets.

“When I’m not working I like to spend time with the grandchildren,” McDowell said.

“I am living proof that you can teach an old dog new tricks.”

He worked at home doing mortgages and then back to an office at First Exchange Bank before he was approached about becoming the city clerk.

“It certainly keeps me busy, but I enjoy what I am doing so who knows, I could be here a long time,” he said.