In the late 1700s what we now call Alabama was wild and unknown. It was an age before the antebellum river culture of the steamboats and before Alabama was called a territory of the United States. The United States was an infant nation but had big plans for the region. These plans included sitting the boundaries between the United States and Spain in the American Southwest of the day.

Congress made the decision to survey the 31st parallel, which separates what we know today as the Florida and Alabama line. 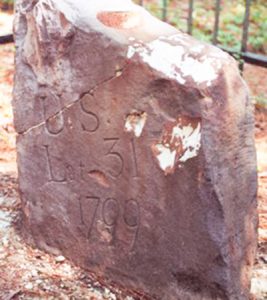 In 1789 Andrew Ellicott, was given the task of surveying the line and traveling to the region. Spain occupied Northwest Florida during this era so much was at stake along this international boundary.

Ellicott was an accomplished surveyor and had surveyed the US boundary with Canada on an earlier expedition. With much fanfare Congress agreed to give Ellicott anything he needed to complete his mission. Boats had to be constructed in England to support the mission so several years passed before Ellicott’s crew could begin their task of surveying the Alabama wilderness.

By 1798 the surveying mission was finally ready to begin. The men traveled to Natchez, Mississippi by river. Ellicott attempted to use as many local surveyors as he could because they knew the land better than anyone. Ellicott likely sought out surveyors at places such as Natchez. In addition to local surveyors, Ellicott took 10 surveyors which were personally known to him.

It has been said that while at Natchez, Ellicott took up with a woman named Bessie who chose to accompany the group on their mission and do Ellicott’s laundry. With a 60 man crew, and one female guest, the group left Natchez unaware of the hardship and slow progress that lay ahead.

During the spring of 1798 yellow fever broke out among the men and many were sick, including Ellicott who nearly died from the disease. After recovery the slow, tedious work began anew.

As the men worked, Ellicott would come behind the group and verify the accuracy of their work. The men made slow progress as they headed east along the 31st parallel. Two miles a day was considered a good day. Men had to cut trails and roads where none had existed before. Every mile along the route was marked by a 12 foot circle of mounded earth.

The slow work ground to a halt when the 60 man crew reached the Mobile River Delta on April 9, 1799. The river was swollen from weeks of incessant rains. After arriving at the river Ellicott erected a stone to mark the location where the American and Spanish territories met.

During this time the Ellicott men made huge piles of fat lighter at Seizemore Bluff and Coon Neck. The men waited until the signs were right (surveying in this era was conducted based on the location of stars or other heavenly bodies in the night sky) and started across the delta.

The men set fire to the piles of fat lighter and surveyors used the burning light from the wood to guide the lines they were shooting across the swampy river delta. At Stockton, Alabama the men erected earthen mound Number 216 which is one of the few remaining markers today.

The men crossed the Conecuh River south of where present day Highway 29 is located. The largest Indian battle to that date occurred between Ellicott’s men and Native Americans along the river.

Ellicott’s crew eventually surveyed across what would become Conecuh National Forest and into Georgia where the survey ended. Following the expedition the Adams administration refused to pay Ellicott for his work and even refused him access to the maps he had submitted during the trip.

Eventually his maps were released and he published a book about the trip called The Journal of Andrew Ellicott. Thomas Jefferson thereafter persuaded the jilted Ellicott to serve as a mentor for Meriweather Lewis who was about to embark upon the Lewis and Clark Expedition. Ellicott’s trip may have been overshadowed by the Lewis and Clark Expedition but the trip was an important one.

The survey marked the border between Spain and the US, planted the American flag in what was then the American Southwest, and blazed a new trail of settlement into what would become Alabama. Within the span of ten years thousands of settlers would make their way to riverfront towns like Montgomery Hill, Claiborne, and Stockton and begin the process of settling Alabama and Northwest Florida.

The late Jeff Ross provided much of the research for this article several years back. Jeff was a true historian and keeper of knowledge in our area and is sincerely missed.