Lambert dedicates life to helping others 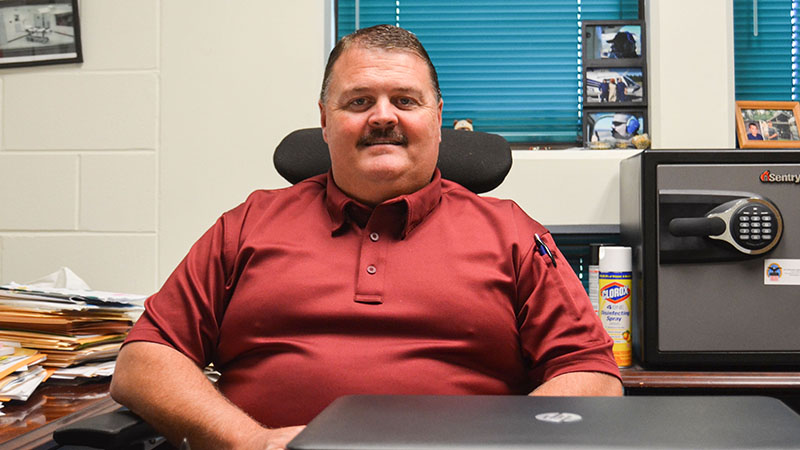 Mike Lambert has been working in law enforcement for the past 26 years, and with the Escambia County Sheriff’s Department since 2005. He didn’t think about that sort of work in his earlier years.

He did, however, think that he would be working closely with the department as his earliest years were spent as an EMT in Monroe County.

Lambert grew up in the community of Goodway and attended schools in Monroe County. He graduated from J.U. Blacksher High School in Uriah, Ala. in 1988.

“I went on to, what was then, Patrick Henry State Junior College in Monroeville,” he said. “I was pretty sure that I was going to be a paramedic. I even taught some classes in the basic EMT Program. I thought that would be my future, but it was not to be.

In 1997 he was approached by Sheriff Tim Hawsey, who at the time was chief in

Escmabia County. He took the job and began his work with the department.

“I was involved with almost all the department in those days,” he said. “That included everything from investigation and traffic all the way to murder.”

He left the sheriff’s department and became the chief of police for Flomaton, where he worked for the next four or five years.

“I learned a lot and I enjoyed my time in Flomaton,” Lambert said. “I also met my wife when I was working there. But I got a call from Sheriff Grover Smith to come back and work for the sheriff’s department again, and I took the opportunity.

“Things were really different in those early days,” he added. “We had maybe 10 deputies working at the time. Today there are way more than that. The increase in crime has seen lots of changes in operation. Techniques have changed, but it seems as if we have more inmates today than we ever had. One of the problems, of course, is the shortage of money to be able to do what we would all like to do.”

Lambert began his law enforcement career as a sergeant and then a lieutenant working on the Drug Task Force.

According to Lambert, this part of the state is prime territory for the drug trade. This has become one of the biggest problems the department has. I-10 runs all the way across the southern part of the state and makes a prime drug corridor.

After Lambert got the call from Sheriff Smith, he took on the job of becoming chief deputy which makes him second in command at the office.

“My job is to know what the chief has on his agenda and to make sure that it is carried out,” he said. The people of Escambia County are lucky to have a hands-on sheriff, but it is my job to see that things happen behind the scenes. I love my work and I am genuinely involved with the public safety of those in the community. We want to be a proactive department as well as a reactive one. Everybody makes mistakes, but hopefully they can learn from them and not make the same mistake again.”

Lambert’s work has been noticed. He won the Citizen of the Year award from Flomaton for 2013-14 and was given an award in 1993 for saving his cousin’s life in a vehicle wreck.