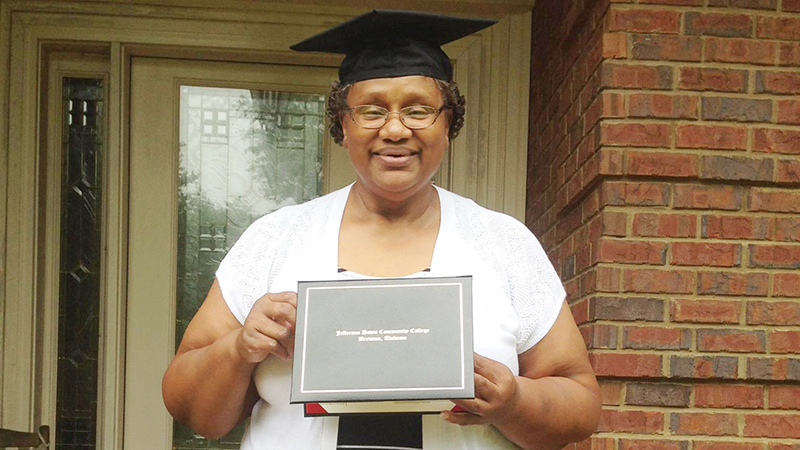 When Glennie Culliver finished her classes at Jefferson Davis Community College in 1975, she transferred to Troy State University to get her bachelor’s degree so that she could fulfill her dream of teaching school.

The problem was that, although she had done the work to graduate from JDCC, she never applied for graduation, so she never received a diploma. Recently, due to a lot of work with Robin Henley Sessions and Culliver’s daughter, Loletta Jackson, Culliver has finally received her diploma.

She proudly displayed her diploma which  even has the original date that she should have received it.

“I don’t want people to think I have been teaching all these years without a diploma, but I had done all the work I needed to do to get it,” she said. “I just didn’t apply for it. I didn’t know that I needed to apply.”

Culliver said she never thought about it too much, but recently she decided she did want to have a diploma to display.

“After receiving her bachelor of arts degree in education from Troy State University, teaching for more than 35 years, and retiring in 2013, my mother was awarded her Associate of Arts degree from Jefferson Davis Community College,” said Jackson. “I wanted her to have it and let everyone congratulate her on her accomplishment 41 years later.”

Culliver was born and raised in Brewton. She graduated from T.R. Miller High School in 1972.

“I came from a long line of teachers,” she said. “I always knew that was what I wanted to do. I enrolled at JDCC right after high school but I had to interrupt my education in 1973 when my daughter was born. I finished my courses in 1975 and transferred to Troy State. Since I transferred, no one ever asked to see my diploma.”

She graduated from Troy in 1977 and came back to Brewton to begin her teaching career. She began working with Lucile Harvey’s daycare and was there about a year. She subbed at W.S. Neal Middle School, and continued packing blueberries in the summertime, which she did for years.

“I packed blueberries until the packing plant moved to the building on U.S. 31,” she said. “It was a good way to earn money as I was growing up.

“In 1978, Mr. Salter hired me to teach at the middle school,” Culliver added. “ A year later I began teaching science and social studies to fifth graders at W.S. Middle School. That was where I worked until I retired in 2013. I loved science and showing how things work. The students learn a lot more by doing than they do by reading about it in a book.”

She also went back to college to become “highly qualified” as part of her teaching job.

“But still, no one asked to see my diploma,” she chuckled.

Now that she has retired, she still stays busy with her community and church activities. She is married to Large Culliver Jr. and she has two children, Anthony Redmon, who played professional football and is now living in Tennessee. He and his wife, Stephanie, have two daughters, Haleigh, and Kelsleigh. Her daughter, Loletta Jackson, lives in Brewton and teaches at Coastal Alabama Community College. She is married to Ricky George Jackson.

Culliver is still active in her church, Second St. John Missionary Baptist Church where she has served in various positions. She volunteers with RSVP with tax counseling for the elderly, is a member of Eastern Star and in the National Sorority of Phi Delta Kappa Inc, Gama Theta Chapter.

Culliver said she enjoyed the years she spent teaching the students that have come through the W.S. Neal School System.