She helps take care of so many here 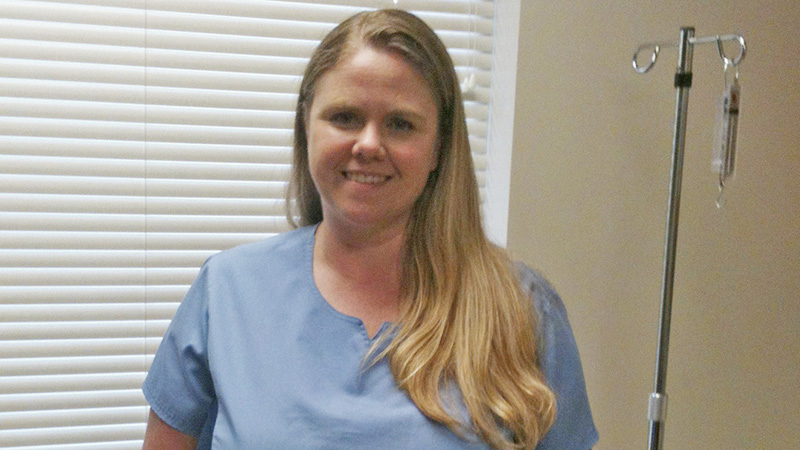 Natalie Ziegler is one of the peritoneal nurses employed by DaVita Dialysis Center.

Natalie Ziegler is one of the peritoneal nurses employed by DaVita Dialysis Center. She is part of a group of nurses and doctors who make the trip to Brewton several times a week to treat those who are required to have dialysis.

Ziegler lives in Pace, but a couple of days a week she can be found at the Brewton site.

Kidney disease is the ninth leading cause of death, and the United States has one of the highest mortality rates in countries that are considered more industrialized in the world.

“There are two main types of dialysis, peritoneal and Hemodialysis,” Ziegler said. “I make the drive to Brewton twice a week to check on my patients, and I am always available for them.

“We only do the peritoneal dialysis here in Brewton,” she added. “We see people who have been referred to us by doctors because of kidney failure. Most of the time, dialysis is used on patients who are treated until a kidney transplant can be done. It just gives them more time.”

Ziegler grew up in San Diego, Calif., and moved to Colorado when she was 17. She wanted to be a nurse, and while in the nursing program she got involved in dialysis. While she was getting her nurse’s training, she worked for three years at a nursing home.

In 2003, she went to work at the DaVita Center headquarters in Colorado and in 2009 she and her family moved to Pace, Fla.

“While we were in Colorado, I almost froze to death, so when we decided to move again we had three criteria for where to go,” she said. “It had to be a place with no snow, close to water and good schools. We found that in Pace.”

She is married and has one son, 14-year-old Ethan, who will go into high school this year.

“The type of dialysis we do here in Brewton is peritoneal,”she added. “Right now I have six patients in Brewton that I am training to be able to do the dialysis at home.

“This gives them more free time that would have been lost if they had to go into the office to get it done,” she said of her patients. “They can even do it at night in the comfort of their own surroundings. As it is now, patients see their nurse twice a month and the doctor once a month.

“I serve as a bridge between the patient and the doctors.”

Ziegler said there are many patients who could live longer and have a better life if they would eat right, take advantage of information on signs  to look for, certain diseases, such as diabetes, and put them into a good doctor’s hands.

“I have several patients most of the time,” Ziegler said. “I really get attached to some of them while I am training them to do their dialysis at home.

“I enjoy seeing patients and bonding with them. I like to see patients feel better.”