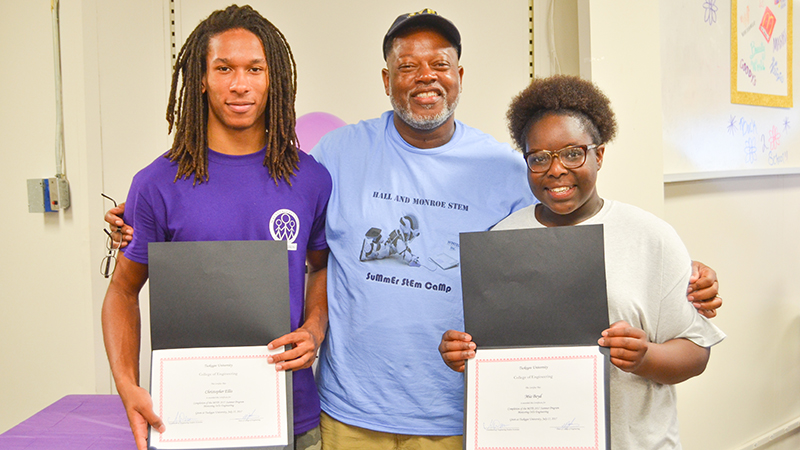 “We learned different types engineering– aerospace, chemical, computer, mechanical,” he said. “Computer and mechanical were my favorite subjects. It was also good to get a taste of campus life– living on my own and getting a feel of what its like to go to classes everyday, and managing my downtime.

Boyd, a junior at W.S. Neal High School, said attending the MITE program reassured what she plans to do after high school.

“The program really hit home for me,” Boyd said. “I like that I could bond with the people there. We’re all so much alike. There was a day we did chemical engineering and the professor had these chemicals and she would heat them and cool them and the solution would have different structures and colors. I liked that.

Boyd said she would do the summer program again in a heartbeat.

Boyd said she is planning to apply to Tuskegee for chemical engineering.

Ellis said he was fortunate to visit Tuskegee.

“It was a great experience to meet a lot of friends that have my mindset,” Ellis said. “I thank Mr. Hall and Mrs. Toya Dean for the opportunity. He sponsored me for Tuskegee and Flight Academy. And I’ll like to thank D.W. McMillan for sponsoring me as well for the flight academy.”

Ellis, along with TRM students Morgan Longmire and Amaiya Johnson, were among a group of students who received summer sponsorships to attend the National Flight Academy’s six-day Summer Deployment Program at Naval Air Station in Pensacola, Fla., through the D. W. McMillian Foundation.

“The academy was naval base military style, which was something I liked,” Ellis said.

“We followed a schedule, and it was well paced. It was really a VIP experience. We learned the essence of flying. We had bunk beds and an area we had to take care of in the morning. We went to the museum and got to witness the Blue Angels.”

Ellis said they all had code names issued by their chief.

“Mine was Darby, after Ronald Darby the football player for the Buffalo Bills,” Ellis said with a chuckle to follow. “My chief said I looked like him that’s why. I don’t see it.” Ellis said some of the colleges he’ll apply for admission to are Tuskegee University and the University of Alabama.

Marcus Hall, co-director with his wife Valerie of the Monroe-Hall STEM program in Brewton, said the opportunity to send some of his kids to Tuskegee and the flight academy was made possible by his alma mater Tuskegee University and proud sponsor of the STEM program, the D.W. McMillan Foundation and Trust.

“We’re just thankful to Tuskegee and Dan McMillan of the D.W. McMillan Foundation and Trust for investing in our kids,” Hall said. “It all stems back to the community giving back to the foundation, the John L. Fisher Center, and our STEM program. All our kids had to do was show up at Tuskegee.

“It’s normally about $500 a kid for the summer program, and the Flight Academy is around $1,500, and all our kids had to do was be interested and show up. Both were really great opportunities that I’m glad the students of our STEM program could learn, grow, and build off of for the future.”