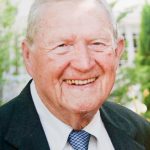 He was born in Brewton on April 2, 1934, to the late Bessie Mae and Marvin Houston Holland. He attended Troy University from 1952 to 1956 where he played football for the Troy Trojans and met the love of his life, Mary Jean Whaley.

After graduation from college, he worked for Goodyear Tire and Auto as the store manager in Thomasville, Elberton and Milledgeville, Ga. He moved to Valdosta in 1965 and purchased the Sinclair Gasoline Distributorship, which became Holland Oil Company. He settled here with his family and became a vital part of the Valdosta community for the next several generations.

He enjoyed spending time with his family and playing golf with his friends. He has been an active sportsman and a member of the First Baptist Church and his Sunday School Class with some of his dearest friends.

He was preceded in death by his wife, Mary Jean Holland; and two brothers, Jack Holland and Marvin Holland.

In lieu of flowers, donations may be made to the American Cancer Society or First Baptist Church.

Condolences may be conveyed to the family on the obituary page of mclanecares.com.

Visitation will be held today, Aug. 23, at Holly Grove United Methodist Church from 2 p.m. until a 3 p.m. service time with the Rev. Jason Blackwell and the Rev. Robert McMillan officiating and Craver’s Funeral Home directing.

Honorary pallbearers will be Ryan Meier and Christopher Meier.

He was born in Pensacola, Fla., and had been a lifelong resident of Castleberry. He worked as a correctional officer at Holman Prison in Atmore. He was of the Baptist faith and was a member of Vines and Branches Church.

He was preceded in death by his mother, Mamie Lou Anthony Weaver; and step-brother, Jimmy Anthony.

Share your memories and condolences with the family at cravers.com.

Linniesteen Bell Dawkins, 81, of Dawkins Road in Brewton, passed away Mon., Aug. 21, 2017, in a local nursing facility after brief illness.

Visitation will be held today, Aug. 23, from 6 p.m. until 8 p.m. at Williams Memorial Chapel Funeral Home in Brewton.

She was a native of Escambia County and a former resident of Huntsville, before moving back to Brewton. She was a member of May Creek United Methodist Church, a 1954 graduate of W.S. Neal High School, and a 1974 graduate of the Jefferson Davis Junior College RN program. She worked as an industrial nurse at Judy Bond and a RN at D.W. McMillan Hospital.

She is preceded in death by parents, Albert and Eunice Gregg Bell; and brother, Ray Bell.

“Bert” as she was so fondly called, accepted Christ at an early age and committed to membership with the Sandy Grove Missionary Baptist Church. During this time, she was faithful and dedicated to the church, choir and missionary ministries. She was instrumental in chartering the Order of Eastern Star, Johnsonville Chapter No. 868 and the Inspiration Spiritual Singers.

At Sandy Grove she was known for praising God and giving peppermints to everyone on Sunday morning. She was employed with Altex Inc. for many years. She was always full of laughter and joy.

She was preceded in death by her husband, Henry Brazile; and grandson, Brandon Wright.

She was preceded in death by her parents, Floyd Thomas Lee and Mazie Golden Lee; and brothers, Jerry Lee and Pookie Lee.

He was a native and life long resident of Conecuh County. He owned and operated Junkyard & Son Trucking. He was an avid hunter and fisherman, and fan of the University of Alabama Crimson Tide. He was a member of Union Grove Freewill Baptist Church.

Charles Wayne Wilson, 70, of Brigham Lane in Brewton, passed away Tues., May 30, 2017, at his residence. He was a native and life long resident of Alabama.

He is survived by his family.