Kathryn Fulmerhouser Oliver, 95, of Castleberry passed away Tues., Aug. 29, 2017, at the Mobile Infirmary. 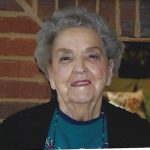 She was born in Reed City, Mich., where she graduated high school at 16 years old.

She moved to California and met her husband James D. Oliver who was stationed in the Navy there at that time. They were married in Ocean Springs, Miss., and later moved to Virginia where she resided with their children while he completed his military career.

In August of 1961, they moved to Castleberry,. While he began a farming career, she built her beauty shop clientele. Both were active members in London Baptist Church. She continued her support of the church after her husband’s death and relocated to Foley. Her love for the church continued and outlives her now.

She was preceded in death by her husband, Jim Oliver.

Alice Inez Johnson Hendricks, 55, of Foshee Road in Brewton, passed away Mon., Sept. 4, at her residence after a brief illness.

Visitation will be held today, Sept.6, from 6 p.m. until 8 p.m. at Williams Memorial Chapel Funeral Home.

She was a native of Clark County and a lifelong resident of Brewton. She was a member of the Pineview Pentecostal Church, a 1980 graduate of W.S. Neal High School and a homemaker. She enjoyed horse riding, canning and crocheting-knitting.

Funeral services were held Sat., Sept. 2, at 3 p.m. at the Little Escambia Baptist Church with the Rev. Leon Stewart, the Rev. Eric Johnson and the Rev. Jonathan Hill officiating. Burial followed at the Traveler’s Rest Cemetery.

She was a native of Brewton and former resident of East Brewton. She resided in Brewton for the past 12 years.

She was a loving wife, mother, grandmother, daughter and sister. She served in the Escambia County Children’s Missionary and was creator of RPM Ministries.

She was a member of the Little Escambia Baptist Church and the Delta Kappa Gamma Society International.

She is survived by her parents, Carson and Nancy Douglas of East Brewton; husband of 30 years, Daniel Johnson; one daughter, Lauren Johnson (Jake) Salter, both of Brewton; one brother, Michael (Angie) Douglas of Pensacola, Fla.; two grandchildren, Aubrey Claire Salter and Joseph Brandt Salter; and one niece, Jolene Douglas Reilly.

Petty-Eastside Chapel Funeral Homes, LLC of Atmore was in charge of all arrangements.

He was born in Mobile and lived most of his life in Monroe County. He worked with G.A. West as a pipefitter foreman in industrial construction.

He is preceded in death by his father, Billy Ray Smith; and grandparents, Comer and Ruth Smith, and Clarence and Daffie Patrick.

In lieu of flowers, the family request that donations be made to the Billy Smith Funeral services in care of Monroe Chapel Funeral Home.

Share condolences online by signing his guestbook at monroechapel.com.

Nina Irene Lawrence Crane, 81, of Tippens Eddy Road of Brewton, passed away Tues., Aug. 29, 2017, in a local hospital after a brief illness.

Visitation will be held Sat., Sept. 2, from 11 a.m. until noon at Williams Memorial Chapel Funeral Home in Brewton.

She was a native of Atlanta, Texas, and a former resident of Homua, La., before moving to Brewton in 1970. She was a member of the Alco Baptist Church, beautician and a homemaker. She enjoyed being a mother, grandmother and working in her flowerbeds.

She is preceded in death by her parents, William and Charley Steward Lawrence; and grandsons, Timothy Brian Crane and Justin David Pemberton.

Delores Payne Anderson, 83, departed this life at her home in Brewton on Mon., Aug. 21, 2017. Her transition from earth to eternity was quiet and peaceful.

She was born in Brewton to the late Judge Lee Payne II and Ruby Pearl Payne on July 5, 1934. She attended school at Springhill School in Brewton. She accepted Christ at an early age and joined Second St. John Baptist Church (Brewton, Alabama).

In 1978, she moved to Palo Alto, Calif., where she lived and worked for more than 20 years. After which, she retired from the VA Medical Center in Redwood City, Calif..

Funeral services were held on Sat., Sept. 2,  at 2 p.m. from the chapel of Craver’s Funeral Home with the Rev. David Harrison officiating. Interment followed in Fort Crawford Cemetery.

She was born in Rome, Ga., and had been a life-long resident of Castleberry. She was a homemaker and was of the Baptist faith.

She was preceded in death by her mother, Lavon Gantt; and brother, Jonathon Gantt.

She is survived by her husband, Mark Janes of Castleberry; father, Jeffrey Gantt of Brewton; daughter, Alissa Harvell of Castleberry; a brother, James Neal of Enterprise; and two grandchildren, Mackenzie Taylor and Karleigh Taylor.

Andrew Leon White, 84, of Spring Drive in Brewton passed away Fri. July 21, 2017, at his residence after a brief illness.

Funeral services were held on Mon., July 24, at 11 a.m. at the Cayawba Springs Baptist Church with the Rev. Jeff Edwards and the Rev. Steve Sexton officiating. Interment with military honors followed in Green Acres Cemetery in Brewton, with Williams Memorial Chapel Funeral Home of Brewton directing.

He was a native and life long resident of Brewton. He was a member of the Catawba Springs Baptist Church. He attended W.S. Neal High School and served in the U.S. Army. He owned White Gas Company and managed Blossman Gas Company.

Edna Myrlnee Warren Pate, 85, of Castleberry passed away Thurs., August 31, 2017, in the Westgate Village Nursing Facility in Brewton, due to complications from Alzheimer’s.

Funeral services were held on Sun., Sept. 3, at London Baptist Church, where she was a lifetime member, serving as a Sunday School teacher and VBS director. Interment was in the London Baptist Church Cemetery. The Rev. Nicholas Gandy and Rev. Thomas E. White officiated. Cope Keahey Funeral Home was in charge of the arrangements.

Known as “Miz Pate” to her students, she was a beloved teacher who taught for more than 30 years, with 29 years of service to the students and families of Conecuh County. Prior to her educational service, she proudly served her country for 20 years as the spouse of career Air Force veteran TSgt Edward Pate, accompanying him, along with their children, to numerous domestic and international duty assignments.

In lieu of flowers the family requests that donations be made to the third grade class at Conecuh County Junior High School, 2347 Cleveland Ave., Castleberry, AL 36432.  Checks should be made payable to the school with the memo item “In honor of Edna Pate.” Cash donations may be brought by the school office.