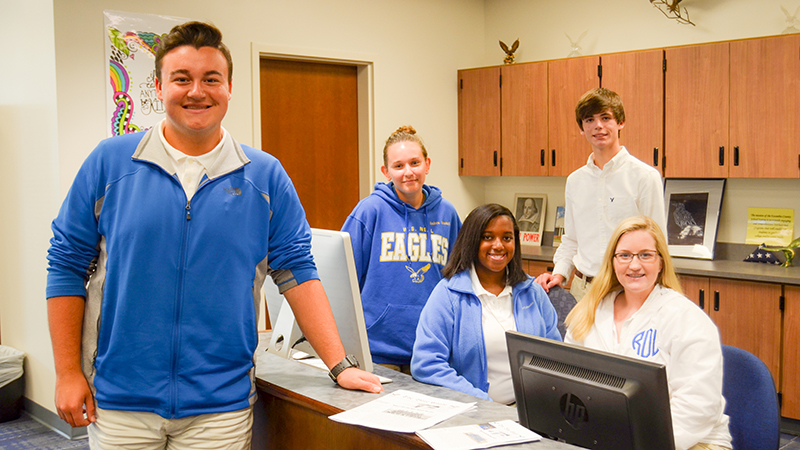 A mix of talented W.S. Neal High School students is giving a voice to the happenings on their campus by creating a student newspaper.

Editor of The Blue Eagle Jacob Odom said the staff of 22 work very well together.

“Everybody does their part,” Odom said. “I really think the paper is good for the out of the box student. This gives them a voice and an opportunity to show what they can do.”

The idea of a school newspaper originated in the opening week of classes back in August. The class is titled “Special Publications” and is taught by long time teacher at WSN Kraig Rittenhouse.

“It was kind of like the blind leading the blind when we got started,” Rittenhouse said. “We were in yearbook class, and I came up with the idea of a newspaper. We did a couple practice articles and just decided let’s go ahead and do one. They’ve taken it and ran with it. I can take no credit for this. This is their work, and I’m proud of it.”

Althea Marsh, junior staff member, said the paper will do a strong job in bridging the gap between students.

“There tends to be a big divide between a lot of students in the school, and this will bring us together where we can talk about different topics, write how-to articles, and how to succeed in class,” Marsh said. “With most on the paper being in honors courses, I feel like we can make a difference in helping others to come up and rise for academic success.”

“We have young student named Americus Madden who’s an unbelievable artist,” Rittenhouse said. “She’s someone I’d love to see go to Savannah Art Design. I’ve seen good talent for 30 years. She ranks up there with any student I’ve ever seen. It’s all free hand with her.

Rittenhouse said the students seem to be having fun putting the newspaper together.

“I do like to take pictures,” Hammack said. “I’m into art. I do like to write about topics I’m interested in, so the paper gives me an outlet to write. I like writing about music and about things that are going on in the world today.”

“They’re all new to this, but they’re all instinctively good writers,” Rittenhouse said of his students. “They have a flare for what they like to do. I don’t really assign anything. They come and clear it with me. Jacob and I do most of the discussing because we want to get the paper a certain way. Within reason, he gives me comments and suggestions and we go from there.”

“Basically I feel like all of us working together towards something is really great for all of us,” Odom said. “Having this class is really beneficial for us to write and talk about things together. The collaborative process is what makes it all work and I believe what will make a great paper.”

Taking on roles in the newspaper is part of the gig, even a role one is not familiar with, as junior writer Rebekah Dyess is learning as she covers some sporting events. “I’ve learned a lot about football since I’ve started covering games, “ Dyess said. “At first I had pages and pages of notes, I’m learning how to condense my stories.”

“Rebekah got thrown into football,” Rittenhouse said. “But she’s taken over and running with it. They’re all learning how to write better but they’re also learning how to condense. For example, an article may need to be 150 words not 250 words. So they need to capture the essence of the story with fewer words and that’s a skill.”

Marsh said the staff works well together because they’re all proactive.

“I have never been in an extracurricular like this class,” Marsh said. “There is no sitting around. We get things done by the deadline. We watch what’s going on but we also take action. We’re involved in our school and we’re also dedicated to everything that we do.”

Odom said the vision of the newspaper is relatively simple.

“The paper is about being fun and informative,” Odom said. “We just want to have fun with it, express opinions to a certain extent, and share ideas.”

The newspaper can be purchased on campus for 25 cents. The group published its first newspaper this past Monday and sold out all 100 copies. Future newspapers are already in the works, with its next publishing date scheduled for Mon., Sept. 24. The Blue Eagle plans to publish every two weeks.