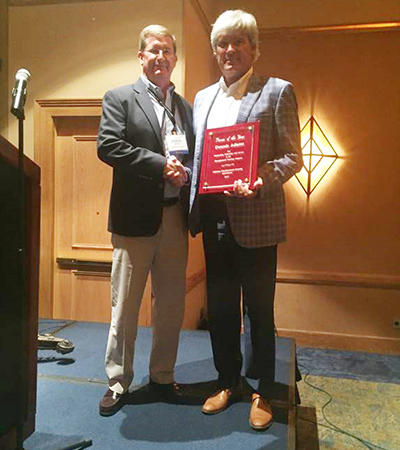 Brewton’s Dennis Adams, owner and founder of Timberline Homes, as well as multiple other businesses in the restaurant, hotel, trucking, insurance and manufactured housing industries, was named “Person of the Year” by the members of the Alabama Manufactured Housing Association. The award was presented during the Association’s annual convention in Orange Beach.

“It is an honor for me to present this award to Dennis,” said Steve Nelson, vice president of Timberline Homes, during the award’s presentation ceremony.

“I’ve known Dennis Adams for 30 years, and he is truly deserving of this award,” Nelson said. “The Person of the Year award is the highest honor our association gives to an individual.”

The award is presented each year during the Association’s annual convention.

Adams has been in retail manufactured housing since 1984. He currently owns and operates eight Timberline locations in Alabama and Mississippi, having sold more than 25,000 homes throughout his career.

In addition to his manufactured home retail centers, he owns several other companies and currently has multiple readiness contracts in place with FEMA and private companies in order to respond to the need for housing for natural disaster.