He was a member of the North Brewton Baptist Church,  a member of the Kiwanis Club, member of The Sepulga River Hunting Club, and a Mason. Elton Crosby was part owner of Brewton Insurance Agency since 1985 before retirement. He was an avid Auburn football fan. 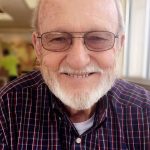 After retirement, he enjoyed his daily “office” meetings at McDonalds. He was loved by all of his friends and family.

He was preceded in death by his parents Claude and Clara Crosby, and one sister, Vonnie Fuqua.

He was a native of St. Mary’s, Ga., and a long time resident of Brewton.

He was of the Protestant Faith, a U.S. Navy Veteran, and a retired Millwright from Smurfit Stone with 30 years of service.

She was preceded in death by her husband, Douglas C. Andrews, and a son, Randy Andrews.

She is survived by a son, Larry (Denise) Andrews of Theodore, and two grandchildren, Shane and Miranda Andrews.

Funeral services will be held on Thurs., Sept. 21, at 2 p.m. from the chapel of Craver’s Funeral Home with Rev. Tony Richburg officiating.  Interment will follow in Hall’s Creek Missionary Baptist Cemetery.

Visitation will be held at Craver’s Funeral Home on tonight from 6 to 8 p.m.

Please share your memories and condolences with the family at www.craversfh.com.