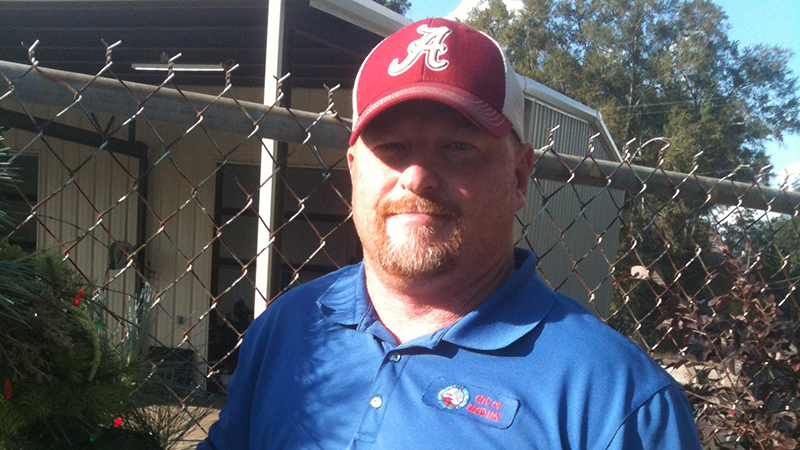 Craig Jerkins is in charge of decorating the city for the holidays. Lydia Grimes I The Brewton Standard

One doesn’t have to go far to see the results of the hard work done by the Department of Public Works in Brewton.

Director of the department, Craig Jerkins, has a crew of around 26 employees to take care of a number of things around town.

One of those responsibilities handled by the department, is to work with Connie Baggett, director of program management for the city, and other city employees to turn the city into a Christmas wonderland this year.

Members of Jerkins’ department have been in charge of getting the decorations up each year, but this year is different. The city council and the mayor have been instrumental in working together to make this year’s display special.

“Most people think we put the decorations up way too early, but what they might not  know is just how long it takes to get it all together,” Jerkins said. “Almost as soon as the decorations are up, we begin to think about what we are going to do next year. We began to plan this years decorations in February, 2017, and we are still waiting on some things.

“The city council stepped up to buy a few new things to add to our old decorations,” he added. “We hardly ever throw anything away. Off and on throughout the year, when we have the time, we restring lights and try to salvage all that we already have.”

The Christmas tree that has been standing in City Park for several years was a real headache. It had 10,000 feet of extension cord and had to be specially handled because the park is just about always damp. According to Jerkins, the problem has been solved by moving that tree to the splash pad at Dogwood Hills and getting another tree for City Park. It is working so much better at the splash pad because there is good drainage already there.

Decorations have been divided between the parks in town giving everyone the opportunity to visit. Perhaps the largest changes have been made at Dogwood Hills. It will be open for the month of December and events are planned for adults and children alike. Santa will be there and an elf village has sprung up.

“We have a train coming, too,” Jerkins said. “We have talked about this before, but we always had to depend on finding one that would be available. We made the decision that if we have our own train, we don’t have to worry about other schedules and it will be available for other events during the year. Another addition to the “Nutcracker Holidays” will be snow. Brewton very seldom sees snow, but with the help of the city, this year there will be a White Christmas.

Jerkins said they are always shopping around to get the best prices and they have found a place in Andalusia, “Jubilee Decor,” that is able to furnish larger displays.

“The employees in my department have worked really hard and it is due to that hard work that our plans have worked out as well as they have,” Jerkins said. “These guys throw their whole hearts into what they do and we can be proud of it. My team deserves the credit for the way the parks in town look.”

Jerkins was born and raised in the Ridge Road area east of East Brewton. He attended school in the county school system and graduated from W.S. Neal High School in 1990. He worked for a few months at Jefferson Davis Community College (Costal Alabama Community College) in the maintenance department before over to work at Brewton Public Works.

“My first job with the city was weedeating,” Jerkins said. “The city has been good to me.”

Jerkins is married to Dottie Clay and, together they have four sons between them.