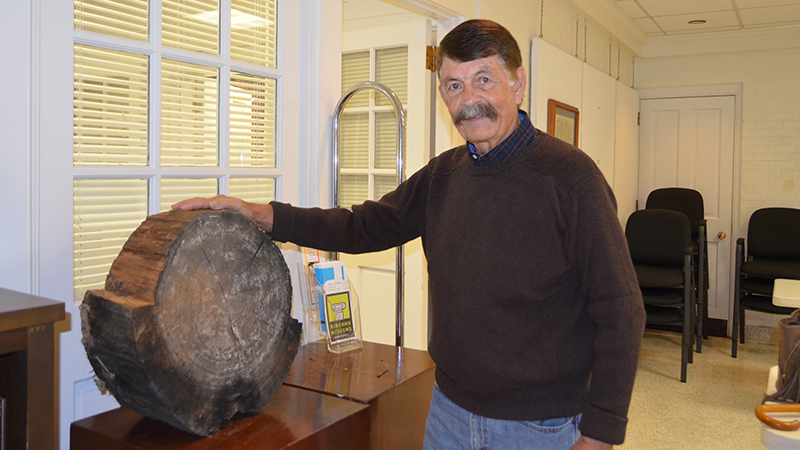 Charles Ware has flown around the world in the Air Force. Lydia Grimes I The Brewton Standard

Sometimes the person who thinks he is the least interesting is just the one who will stand out above the rest and not even realize it.

Charles “Charlie” Ware, of Atmore is one of those people. Although he has led an exciting life, he thinks of himself as just an ordinary guy.

Ware has logged thousands of flying hours and traveled to more than 60 countries. In fact the total hours he has spent flying would probably add up to three and one half years in the air.

“I didn’t start out wanting to fly,” Ware said. “It just seemed to happen. After I finished school, I was due to be drafted. I decided rather than getting drafted into the U.S. Army, I would join the U.S. Air Force. I still had no desire to fly.”

While he was attending the University of South Florida, he agreed to enter into officer training school when he finished college.

“I still had no ambition to fly,” he said. “I was working for a 7-Eleven and they had offered to send me to school to train for a job in advertising.

“There was a shortage of pilots about that time and volunteers were asked to train as pilots for a year at Moody Air Force Base in Valdosta, Ga.,” he added. “I chose to train with the C 130 because it flew all over the world.”

In 1967, he was sent to Vietnam for a year. During that time he flew in to and out of Vietnam with supplies and additional troops.

“During the Battle of Khe Sanh, in 1968, the base was defended by the U.S. Marines and the only way in or out was by air with a crew of five,” he said. “There was only one of those times that we were not hit, but we were never brought down. We never lost a plane during the Khe Sanh mission.”

He said that after a year, he was transferred to Japan but he was still flying over Vietnam and was there for three more years. When Ware came home, he remained in the U.S. Air Force Reserve and was stationed at Eglin Air Force Base for the next 22 years. During those years, he kept going on flying missions for the Reserves while at the same time flying for commercial airlines. He served in Operation Just Cause in Panama and  Operation Desert Storm in Saudi Arabia where the job was to support the troops on the ground. He worked for a while at Maxwell Air Force Base in Montgomery where he was part of a team that went through old documents to declassify the material.

In 1994, he worked in Angola flying for a company that took care of security around the oil wells in that country.

He retired from the Reserves in 1994 and in 1995 he went to work for AirTran Airlines in Orlando. The airlines was originally made up of two planes, but it grew to 11 planes and eventually became part of Southwest Airlines.

He retired in 2003 because he was required to do so at the age of 60, but he continued to work with surveillance in the Balkans with NATO. He lived in Macedonia during this time and said he enjoyed it very much. He also worked at Baghdad, Iraq in support of the military. When the American troops were pulled out, he was too. Finally in 2011, he retired again.

“In all that time I never had a bad accident,” he said. “When I was working for AirTran, we had a loss of hydraulics one time right after take-off and I couldn’t steer the plane. We had just taken off and I circled around and then put on the brakes only on one side. That made us turn to the side. We went onto the grass, but we avoided the end of the runway. The escape slides were deployed and everyone got out safely. I checked the interior of the plane twice to make sure we had everyone out.”

Ware said he is surprised, but he is back where he started after all these years. He was born in Atmore and inherited the old home place, so he came back to Atmore to live.

“I never thought I would come back, but I am familiar with it all,” he said. “I guess I got my sense of adventure from my dad. He was unpredictable and would work all day, come home and tell us to get our coats. We never knew what he would come up with, but we did a lot of camping, and not in campgrounds; we really camped. I have two granddaughters and I have taken them to every state. I want them to remember the good times we had. I think they will.”

Ware lives in his old home in Atmore where he grew up. He graduated from Escambia County High School in 1961. He spends much of his time digging in the old issues of The Brewton Standard and The Atmore Advance and then writing about them.

“I enjoy reading about things that happened in the past,” he said. “I don’t fly anymore except for pleasure.”

For someone who never meant to fly, he certainly did a lot of it.