The local community is mourning the loss of long-time city councilman Fred Barton.

Barton, who represented District 5, passed away this week after a brief illness

“Fred’s passing comes as a shock to us all at City Hall,” said Mayor Yank Lovelace. “I knew and respected Fred as a public servant diligent in his service to the people and dedicated to improving his city. He will be sorely missed and difficult to replace on our council.”

Barton began his service on the city council in November 2008 and would have completed 10 years of service in a few months’ time. He served as Mayor Pro Tem and was a Certified Municipal Official and was active within the Alabama League of Municipalities.

City councilman Joe Watson served alongside Barton during his tenure on the Brewton City Council.

“This was, I believe his third term,” Watson said. “He was instrumental in getting the street named after H.K. Matthews. He was very adamant about it.”

Watson said that Barton also was responsible for getting a food pantry to come to the John L. Fisher Center a few times a year to help needy families with food.

Barton was also instrumental in getting the Fisher Center started.

“Sometimes we could agree to disagree,” he said. “You know how politics is, but he loved all of Brewton not just Alco.”

Barton served as mayor pro tem and Watson said he had a hand in the everyday things of the city.

“Helping people was his main thing,” Watson said. “He was a great friend and great councilman. I went to him a lot for advice, and he was concerned about people.”

“He was a great help with anything dealing with the kids,” Jackson said. “Anything we needed from the city, he would help us get it. He traveled with the team. He was like the players’ father.”

Jackson said that if a player didn’t have money for food on away trips, Barton would pay for their food.

“He was phenomenal,” Jackson said. “He went with us to every away game. He would race up here no matter what he was doing and ride with us on the hot or cold bus. It didn’t matter what time it was. I don’t think he missed a game in two years. He was there supporting us. I can’t say enough about his generosity and time. Anything I asked him to do, he’d do it. He’s going to be missed.”

Last year, Barton was named to the Transportation Public Safety and Communications Committee by the Alabama League of Municipalities in Montgomery.

He served in the Alabama National Guard as a first sergeant in the 1st of the 117th Field Artillery Co., in Geneva.

He was a graduate of Southern Normal School. 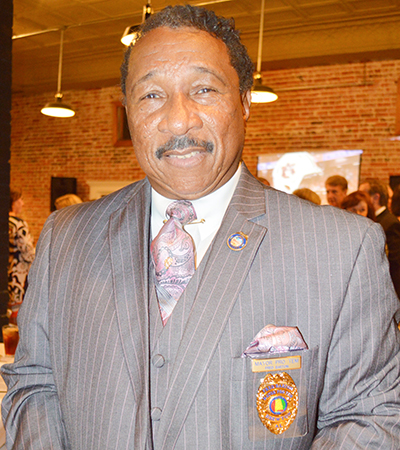