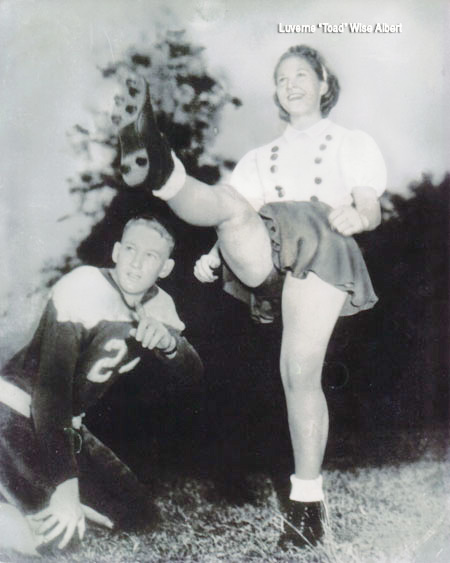 Earlier this week while digging through the memory vault to find some interesting ideas, I stumbled across a very interesting piece on Luverne ‘Toad’ Wise Albert.

To many, you may not know who this lady was but to Atmore she was a star.

Albert was a student at Escambia County High School in Atmore in 1939.

There was nothing too spectacular about her.

She was just a normal teenage girl who was about to change the face of football.

Albert and a group of friends complained one afternoon as they watched from the sidelines at Escambia County High, as the football team took the field.

Their complaint was that there was more money being spent on boys’ sports and women’s sports were laid on the backburner and were not as important.

They took him up on his offer.

Now, Edington knew that the girls had no chance and that he was going to be able to scare them off.

He noticed she actually pretty good and made the decision to train her as the extra-point kicker for the Blue Devils.

Albert sported a white blouse and a blue skirt with no pads for her uniform and people from all over began to hear about the first female football player.

People flocked from all over to the small town of Atmore to see the only female football player in the nation.

Posters, magazines and newspapers across Atmore and the surrounding areas graced their covers with photos of Albert.

Albert also gained the eyes of national media and was graced in newsreels and in Life Magazine.

Fans from as far away as New Orleans, hopped on buses and traveled to Atmore to see Albert lay a shoe to a football.

Albert laid her football career to rest at ECHS and became an excellent golfer.

Albert and her family ran Atmore Sporting Goods for 39 years but she was most known for being the first female football player in history.