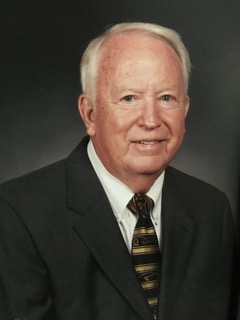 Three months after his birth, his family moved to Conecuh County, Alabama. He grew up on the family farm. His dad died when Joe was age 10. Being the only son with four sisters, he soon became the “man of the house”. At age 17, he enlisted in the United States Navy and was sent to Pearl Harbor during World War II. When the war ended, he returned home to finish high school at Lyeffion School. Joe graduated from Troy State Teacher’s College in 1953. He received a Master’s degree in Education Administration in 1957 from Auburn University. Following graduate school, Joe taught Veterans in Conecuh County for six years. Excel High School was his next teaching position where he taught and coached for five years.

Serving as the Public Relations Director at Southern Pine Cooperative in Brewton for six years was his next career move.

His love for education led him to Jeff Davis Junior College as Dean of Students and Business Manager. He additionally served as Financial Aid Director, Public Relations Director, and sponsor of college yearbook and newspaper. His retirement came in 1989, after twenty-three years at Jeff Davis.

Joe met and married the love of his life, Joyce Booker Weaver on June 1, 1956. During their sixty-three years together, they had four children:

There are eight grandchildren:

Joe was a Charter Member of the Murder Creek Chapter of the Troy Alumni Association. He was an active member of the Greater Brewton Area Lions Club for many years, serving in many leadership roles, including president.

Joe was a member of the Masonic Lodge in Brewton and previously the Excel Masonic Lodge. He was a Mason for over fifty years.

He was inducted into the Outstanding Educators of America in 1973.

He was honored by the Legislature of Alabama in 1990 for thirty-five years of outstanding service to education.

Joseph B. Weaver, Jr. loved God, his family, his country, fellow man and education. He will be sorely missed by many.

A time of visitation was held Tuesday night July 16, 2019 from 6 p.m. until 8 p.m. at the Brewton First Baptist Church Brewton, Alabama.

In lieu of flowers, donations may be made in his memory to Pilots for Christ, P.O. Box 707, Monroeville, AL 36461 or www.pilotsforchrist.net.